The striking sawtooth form of this Mexico City gallery, by British architect David Chipperfield in collaboration with local studio TAAU, is designed to host one of the largest modern art collections in Latin America.

Completed in 2013 in the city's Nuevo Polanco district, Museo Jumex is set on a platform and raised above a plaza on 14 broad columns, and its distinctive roof and walls are made from concrete and white travertine.

Find out more about Mueso Jumex ›

This off-white house in Spain by Swiss architect Gus Wüstemann features a largely windowless exterior, but an internal courtyard surrounded by perforated walls ensures that light permeates the building all year round.

The two-storey home was designed as a second home for a family, who asked for a property where they could enjoy southern Spain's warm climate in privacy.

Find out more about Los Limoneros ›

Christ & Gantenbein's angular extension to the National Museum Zurich provides new galleries, an auditorium and a library for the institution, which houses the largest collection of cultural and historical items in Switzerland.

The Basel architecture practice selected raw concrete for the extension, which opened summer 2016, to juxtapose the stonework of the existing museum building planned by Swiss architect Gustav Gull in the late 19th century.

Find out more about the National Museum Zurich extension ›

Spanish studio Ripolltizon added this family home covered in pale stucco onto the end of a row of traditional houses in Mallorca, Spain.

The house has small street-facing windows to respect the existing streetscape. It matches the height of its neighbour on one side and rises an extra half-storey on the other, where it borders an empty plot.

Find out more about Ferriol House ›

The monumental form of IM Pei's Museum of Islamic Art in Doha, Qatar, was completed on an artificial island on the Arabian Gulf in 2009.

The Pritzker Prize-winning architect used geometric patterns found in Islamic design to inform the building's angular stacked volumes, which are made from light stone and cast changing shadows throughout the day.

Find out more about the Museum of Islamic Art ›

This cedar-clad villa in the Hamptons designed by New York City architects Leroy Street Studio is raised on timber pilotis to anticipate flooding.

Named Bay House, the six-bedroom residence is comprised of two angled wings that open out towards the ocean. The two halves of the home join at its centre, above a ground-level breezeway that frames views of the water.

Find out more about Bay House ›

Jürgen Mayer H's own studio completed this giant latticed timber canopy as part of its redevelopment of the Plaza de la Encarnacíon in Seville, Spain.

The Metropol Parasol scheme includes an archaeological museum, a farmers market, an elevated plaza, and bars and restaurants, all contained beneath and within the parasol structure.

Find out more about Metropol Parasol › 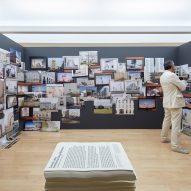