Architecture studio J Mayer H has stripped back a set of brutalist buildings to create a house in Germany that occupies a stack of concrete blocks with mirrored walls.

Called Casa Morgana, the house sits in a lush garden designed by artist and landscape architect Tita Giese.  The project has been longlisted for a Dezeen Award.

J Mayer H took the existing 19th-century buildings back to their concrete shells. The elements are arranged in ziggurat-style, meaning that the successive levels narrow towards the top.

They cut away at some parts and extended others with new, smooth concrete elements to make what the architecture studio calls a "residential sculpture".

While distinct from the outside, these irregularly stacked boxes connect together to create an interior of multi-levelled spaces in the three-storey home, divided either by curtains or thick terrazzo wall sections.

Exposed concrete floors, walls and ceilings create an austere contrast to the garden outside, enhanced by the extensive use of mirrored elements that reflect both views of the outside and of the original concrete structures.

"Mirrored walls reflect the exposed concrete," said the studio. "The terrazzo installations appear like cuts through the concrete walls and expose the inner structure of the material."

Casa Morgana presents a fairly closed elevation towards its neighbours, but the side that faces the garden opens out with a set of double-height, rotating glass-doors. 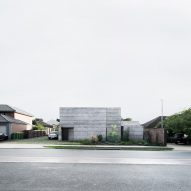 "The large glass pivoting doors open the entire living area into an oasis of bamboo, tree trunks, palms and mushrooms made by the artist Tita Giese," said J Mayer H.

Through these doors, a wide set of concrete steps leads up to the living areas, which have large windows overlooking the garden.

The home is surrounded by concrete planters and new stepped areas that lead down to the lower levels of the garden.

J Mayer H was founded in 1996 by German architect Jürgen Hermann Mayer. Previous projects include a home in Tbilisi with a flowing concrete frame, and a tram stop in Germany made from stacked concrete discs.

Other houses created in a similar style include a house in Mexico formed from offset concrete boxes, and a residence in Australia made of rammed concrete with a hidden courtyard garden at its centre.

Photography is by David Franck.