Brazilian studio Debaixo do Bloco has stripped back the curved corner of a former hospital to create this art gallery in Brasília.

The local architects renovated a 105-square-metre space inside an abandoned hospital – built in the Brazilian capital in the 1950s – to create art gallery and events space Galeria Meia 1.

The overhaul began by ripping out the partitioning walls, revealing a concrete structure comprising three curved beams supported by a series columns.

After exposing the structure, the studio chose to make it the centrepiece of the design. White ceiling slabs are placed either side to frame and support the beams, while minimal finishes were choses to complement its rough texture.

"The preservation of this [unusual structure] and emphasising it in the project became the premise of this work," said Debaixo do Bloco, which translates to English as Under the Block. "The concrete and structures are without finishes to maintain a rustic appearance, and reveal the imperfections and the authenticity of the space."

Translucent glass shutters are fitted along the curved wall at the front of the gallery to allow plenty of daylight inside, as well as maintaining privacy. The windows are placed on pivots, opening to the garden.

White netted curtains run along the front of this glazed wall to offer more privacy and reduce glare.

Existing cement boards lining the walls were left exposed, while dark grey floor slabs provide a neutral backdrop for artwork on show. The workbench at the back of the space features a sanded black sandstone base, topped with an angular slab of white Carrara marble to also complement these tones.

Most of the furnishings selected for the gallery feature brown hues to offset the monochrome backdrop. Among the pieces is a low-level brown leather chair, which is placed between the concrete columns beneath a large standing lamp.

Other furnishings include a hammock-like chair covered in animal fur, a sofa set along one wall, and wooden side tables. There is also a pair of grey chairs with wooden frames and rugs with geometric patterns that brighten up the space.

"In the middle of this grey and white climate, the furniture was purposely chosen in caramels, natural leather and wood to bring the warmth to the gallery and prevent the environment from staying cold," said the studio.

Gallery Six 1 is currently showcasing the work of Brazilian artist Christus Nobrega in an exhibition that will run until 8 November 2017.

Under the Block Architecture's renovation is one of many projects that focus on reusing buildings in creative ways. Examples include the transformation of a former Copenhagen coal crane into private retreat and a sex shop that was converted into tiny Japanese art gallery. 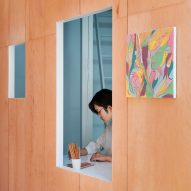