Called 2510 Temple, the apartment complex is located in the historic Filipinotown district, just west of Downtown LA. Offering both market-rate and affordable apartments, the development is intended to help address the housing crisis in the city, where home prices have skyrocketed and construction has failed to keep pace with the need for multifamily housing.

Occupying a full city block and surrounded by low-scale structures, the apartment complex is designed to respond to its context – at both the neighbourhood and city-wide level. The concrete base of the building houses commercial space, while the upper portion contains apartments and tenant amenities.

"The base activates the streetscape and gives the project a human-scale by mediating between it and the apartment buildings above," the team said. "The base also serves as a plinth, separating the private/residential portion of the project from the public areas."

For the apartments, the team arranged multi-storey volumes in a U shape around a central courtyard with a swimming pool. Standard apartments occupy the lowest floor, while the upper two levels are given over to townhouse-style units. Clad in cement-fibre board, the residential volumes feature skinny window boxes and jagged rooflines.

"The building is capped in a metal panel roof, sloped to maximise natural light and ventilation through north-facing clerestory windows," the team said.

The entrance to the complex is marked by a large, sculptural element wrapped in dark metal panels. "The sculptural form of the entry serves as a connection between the public and private areas of the project," the team said.

The building contains a total of 47 residential units. Amenities such as shared offices, a gym and a community room help give the building "an urban identity".

Other projects by Tighe Architecture include the revamp of communal spaces within two nondescript, 50-year-old office buildings in the Los Angeles area. 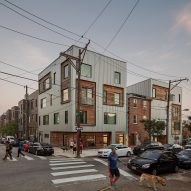