Dezeen promotion: The Salon Art + Design fair has announced the galleries confirmed for next month's event in New York, which will present work by designers including Zaha Hadid and Faye Toogood, and Dezeen readers get a discount on day passes.

Dezeen is media partner for The Salon Art + Design, which will take place at the Park Avenue Armory on the Upper East Side from 9 to 13 November 207. Dezeen readers can receive 20 per cent off the price of daily passes by using the code DEZEEN20 when purchasing tickets.

Organised by Sanford Smith + Associates, the annual New York fair is aimed at art and design collectors. Exhibits include furniture, lighting, glass and ceramics, as well as decorative and fine art, from the collections of international galleries.

The Salon Art + Design has announced that this year, its sixth edition, will include 56 galleries from 11 countries – including the US, Belgium, Denmark, France, Germany, Italy, Monaco, the Netherlands, Spain, Sweden and the UK.

Amsterdam design studio Formafantasma's Delta collection based on Roman artefacts and architecture will be among the lighting designs at the fair.

Other unusual smaller objects will include Michael Eden's Wedgwoodn't Vases, which are created using rapid manufacturing and ceramic materials that don't need firing. The vase collection forms a continuation of the project that Eden began during his studies at the Royal College of Art in London.

Along with contemporary pieces, visitors can also expect to see collectible antiques, and 20th-century century designs in popular styles such as art nouveau, art deco, and mid-century modern.

"We are delighted to announce this extraordinary lineup of distinguished exhibitors," said the fair's executive director Jill Bokor.

"This year's fair is poised to present an ever broadening spectrum of the world's great design with an exploration of emerging architectural furniture and decorative art enhanced by blue-chip modern art."

For more information about the fair, and to buy tickets to attend using the DEZEEN20 code, visit The Salon Art + Design website. 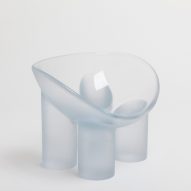