Interior architect Arjaan De Feyter has completed the renovation of an apartment built across four old silos in a former malting distillery in Belgium.

Located just outside Antwerp, the canal-side silo building is part of a former malting distillery that has been regenerated by by Axel Vervoordt Real Estate.

Belonging to a couple with grown-up children, the 200-metre-square, third-floor apartment is arranged across four of the cellular concrete tubes where the distillery's grain used to be stored.

Connected by short corridors, one of the four tubes was converted into a square by the developers to create one space with straight walls within the apartment.

De Feyter embraced the building's circular room layouts created by the tubes, inserting just two straight walls to create what he refers to as "visual pauses".

Upon entering the apartment, visitors walk through the first silo, where one of the inserted walls divides the space into a hallway, study and bathroom.

The hallway leads through to the circular living room located in the second silo, where linen curtains that encircles the centre of the space acts as an acoustic room divider while also creating privacy.

An open-plan kitchen and dining area that overlooks the canal occupies the square silo.

The made-to-measure kitchen countertops are crafted from slabs of titanium-toned travertine, while the cabinets are made from silvered ash finished with gall ink and polished manually to keep their natural colour.

The third and final circular silo that leads off the dining room is occupied by a bedroom and ensuite, which are divided by the second straight partition wall.

On the bedroom side, the wall doubles as a set of built-in wardrobes with silvered ash doors that stretch into the dining room space.

In keeping with the apartment's monochrome palette, the silos' concrete walls are left exposed, finished using a mineral painting technique, while a micro-topping surface treatment has been applied to the floors.

"The whole atmosphere of the interior was created by us," Arjaan De Feyter told Dezeen. "I wouldn't call the palette neutral, but rather calm, sophisticated and restrained. I personally think the nature stone is so beautiful."

"Also the difference in rawness of the wood has so many colours," he continued. "The brass details, the raw edges of the walls, everything is well thought to make it cosy and 'naturel'. But the people who're living there are bringing in the real color."

Arjaan De Feyter isn't the only designer to complete a project in a former silo building in recent months.

September saw the opening of Thomas Heatherwick's Zeitz MOCAA galleries inside a hollowed out grain silo in Cape Town, while Danish studio COBE converted a former grain-storage silo in Copenhagen into an apartment building.

In Norway, Barcelona-based MX_SI and Mestres Wåge Arquitectes are in the early stages of converting a 1930s silo in the city of Kristiansand into an art museum and cultural centre.

Photography is by Piet Albert Goethals. 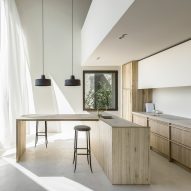