Dezeen promotion: highlights from the Architecture and Design Film Festival taking place in New York City this week include a documentary about Australian architect Glenn Murcutt and a movie set among the modernist gems of Columbus, Indiana.

The ninth edition of the Architecture and Design Film Festival (ADFF) New York takes place from 1 to 5 November 2017 at the Cinépolis theatre complex in Chelsea.

The programme includes more than 30 short and feature-length films selected by festival director Kyle Bergman, along with panel discussions, filmmaker question-and-answer sessions, a pop-up bookstore by Phaidon, and VR experiences created by Gary Hustwit, director of Helvetica and Objectified.

The festival will host the world premieres of four movies. The first, SuperDesign, is a documentary about the emergence of Italian Radical Design during the country's tumultuous political period in the 1960s and 1970s. It includes previously unseen archive footage, and interviews with key members of the movement such as Gaetano Pesce, Ugo La Pietra and Alessandro Mendini.

Another film making its debut is Made in Ilima, which follows the construction of a conservation-focused primary school and community centre in an isolated part of the Democratic Republic of Congo. The project was completed by MASS Design Group and the African Wildlife Foundation in 2012, and involved using local craft and ecological knowledge to help preserve the forest and its endangered inhabitants.

Glenn Murcutt: Spirit of Place will also have its US premiere during the festival. The documentary explores the life and work of the famous Australian architect and 2002 Pritzker Prize winner, as he undertakes an ambitious project: a contemporary mosque for Melbourne.

Other highlights will include Columbus, a feature film based and shot in the small Indiana city that is home to one of the world's best collections of significant modern architecture. It follows the story of two young people who bond and share their emotional strife as they explore buildings by the likes of Eero Saarinen, IM Pei and Richard Meier. The film's director Kogonada will be present following the screening at 6:45pm, Saturday 4 November 2017.

Kevin Roche: The Quiet Architect provides a glimpse into the career of the 95-year-old Irish-American, whose work includes the Ford Foundation, Oakland Museum of California, and four decades spent designing new galleries for The Met in New York. Roche will be present for a discussion with director Mark Noonan following the screening at 4:15pm, Saturday 4 November 2017.

For more information, and to see the full line-up of films, screening times and Q&A sessions, visit the ADFF website. 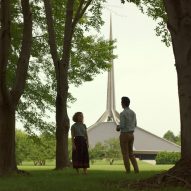