Danish firm 3XN has won a competition to build a residential complex in Toronto, which will comprise a pair of tower peaks covered in rippling terraces based on the waves of the nearby lake.

Developers Tridel and Hines organised the contest for the condominium as part of its transformation of the East Bayfront, a former industrial site in the Canadian city, into a new community called Bayside.

The Copenhagen-based firm's winning Waves at Bayside proposal will be set on the edge of Lake Ontario, and comprise a pair of residential towers that are tapered away from one another to maintain views to the water from neighbouring buildings.

Rising to heights of 60 and 59 metres, the two towers will also be staggered to created terraces for each residence. The curving balconies are described by 3XN as a "reflection of the waves across Lake Ontario".

"The building is shaped as a landscape with two high points and a valley in-between," said the firm. "By shifting these two 'peaks' slightly apart, 3XN was able to maximise waterfront views from each unit."

An elevated public plaza will be set on top of the dipped section in the middle of the complex, while the floors below will house the indoor communal facilities.

Glazing will form the walls facing the promenade along the lake front to continue the connection with the water, and a walkway will carve through the middle to create a public passage underneath the building.

With construction slated for 2019, Waves at Bayside marks the fourth and final condominium intended for the Bayside neighbourhood. Others include an L-shaped complex also designed by 3XN, and a pair by US firm Arquitectonica.

Tridel and Hines' development of the site forms part of a wider regeneration of Toronto's waterfront. The project overseen by Waterfront Toronto will also see Google parent company Alphabet create a high-tech neighbourhood on an adjacent 800-acre (324-hectare) plot.

The announcement of 3XN's competition-winning design follows a slew of large-scale projects recently unveiled for Toronto. Earlier this month, the Danish firm announced it is building its first high-rise in North America in the city, while other towers by Hariri Pontarini and Pinnacle and Foster + Partners are also planned. 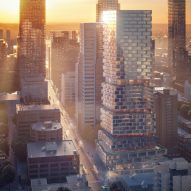