Joost van Bleiswijk used disjointed steel rods to create this collection of furniture and lighting, which is based on huge abstract paintings the designer created in his studio.

Van Bleiswijk presented the Sketch collection during this year's Dutch Design Week at an exhibition in his new studio, which he shares with fellow Dutch designer Kiki van Eijk.

Each of the sketch-like lamps and tables making up the collection was influenced by Van Bleiswijk's paintings, which feature expressionist-style strokes of thick black paint.

"I like to think and draw in clear lines – lines that are recognisable and very direct, hard and honest," the designer told Dezeen.

To replicate the look of his paintings, Van Bleiswijk used steel rods with a grainy black powder-coat. These were welded together to create disjointed frames.

"With two people, one welder and one designer, these pieces came to life in no time," he said. "One was holding the steel, the other welding."

Van Bleiswijk previously employed a similar line-drawn style for his Protopunk furniture collection, which looked to be covered in chalk-like marks.

The Sketch collection formed part of Van Bleiswijk and Van Eijk's Tinkering Labs exhibition, which was hosted at their new studio, in a building that was once a laboratory for electronics brand Philips.

The exhibition offered visitors a first-hand insight into how the designers work on a day to day basis. Collections were presented alongside the machines used to make them, as well as sketches and scaled-down models.

"The studio is a hub for experimentation – a place for spontaneous creation and physical exploration across mediums and materials," said the designers.

Dutch Design Week took place this year from 21 to 29 October 2017 in Eindhoven. 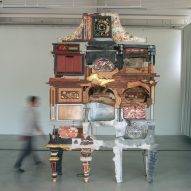 Also during the festival, Mirjam de Bruijn showcased her sustainable household cleaning products in the form of waterless capsules, and Billie van Katwijk presented a range of bags and accessories made from discarded cow stomachs.

Dezeen also hosted a series of talks discussing how design can answer some of the world's big problems, from pollution to terrorism. All of these talks are available to watch via our Good Design for a Bad World page.