Two extensions are set each end of the building in the New Mexico capital. The aluminium cladding these volumes is intended to complement the railyard facing the gallery on the city's Paseo de Peralta.

"The folded, perforated-aluminum facade system was carefully calibrated to be appropriate both for SITE’s immediate context in an old railyard, as well as in contrast to the traditional construction methods and effects that prevail in the surrounding cityscape," said the architects in a statement.

"The exuberant new exterior of the building is intended to signal a welcoming gesture to the community, while also serving as an iconic new presence for the institution as it moves forward," it added.

At one end, the aluminium walls lift into a peak to front the new glazed entrance, which opens onto the cafe and lobby. At the rear, the walls enclose an outdoor porch alongside a new multi-purpose space for various public events. A staircase leads from the yard to an outdoor seating area on the first floor.

Along with the new exhibition spaces, the architects were also tasked to improve the staff facilities for the institution, which was established in 1992.

"The minimal upgrades and interventions SITE had performed over the last 20 years to make it a home for art had become part of its story, but the building nonetheless still posed significant limitations," said the architects. "As the organisation matured, SITE was faced with the profound logistical demands relating to art handling and display that are common to museums everywhere."

To resolve this, the firm added new workshops and meeting rooms as part of its reconfiguration, as well as a new a loading bay to bring in larger pieces of artwork.

Finishes inside the galleries are pared-back, including exposed concrete flooring and white-painted walls, to accommodate a range of artworks. Office spaces are similarly finished simply, with plenty of glazed partitions that offer views between the different space, as well as plenty of light.

SHoP Architects was founded in 1991 in New York, and has completed a number of projects in its home city. Among its most recent projects are a pair of "dancing" copper skyscrapers and a high-rise in Brooklyn described as the tallest modular building in the world. 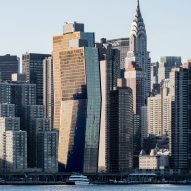 Photography is by Jeff Goldberg from ESTO Photographs. Video is by Spirit of Space.