Taiwanese designer Yi-Fei Chen has created a chair that explodes if sat on for too long, giving her an excuse to get up and escape an awkward situation.

The designer, who graduated from Design Academy Eindhoven last year, presented her Excuse Me stool during this year's Dutch Design Week. The project is intended to symbolise her struggle with social anxiety.

The wooden stool is topped by a cushion stuffed with foam pellets, which slowly inflates as the user sits on it. The chair deflates if left alone for a prolonged period of time – but if someone sits on it for too long, it will explode.

To stop the seat from exploding, the sitter can pour water into a glass tube, which triggers a digital valve to release air. This causes the seat to shrink slightly and gives the user a constant excuse to leave a conversation to fetch more water.

The expanding seat is designed to represent the build-up of anxiety and social pressure Chen experiences in group situations.

In her native country of Taiwan, the designer says it is considered taboo to cite anxiety when excusing yourself from a social situation, and that the pressure to fit in with others can prevent people from expressing themselves honestly.

"Sometimes I just want to be alone, but in my culture, it's impolite to say so," she told Dezeen. "If you need private time at a party, people will think that your mum is sick or that your dog has died."

She usually relies on elaborate excuses, such as needing to visit an ATM to withdraw cash or taking a cigarette break.

"I was actually inspired by a smoker," she says. "I wanted to create something that's like my cigarette. It needs to be something that you see in social occasions a lot, and that only one person can use, so I think a chair is the perfect thing."

The stool comes with an instruction manual and can be adjusted to explode in a timeframe that suits the user, which Chen says would typically be one or two hours.

"It's a humorous way to describe the 'excuse culture'," Chen says. "But people don't talk about social anxiety, and that's also quite interesting for me."

Chen previously explored her own struggles with mental health for her graduation project, when she created a gun that collects tears and fires them.

"My work all comes from my personal struggles," she said. "When I first make something, I feel like it's stupid. But then I realise other people share these problems, so it becomes a personal healing process."

She wants to develop the Excuse Me chair concept into a modular device that can be attached to any seat, and also plans to test her stool in public to see how people react.

Her project was on display at an exhibition of Taiwanese designers at the Temporary Art Centre in Eindhoven during this year's Dutch Design Week, which took place from 21 to 29 October.

Other shows that took place during the week-long event included an exhibition showcasing designers' archives and an "embassy" exploring sustainable foods of the future. 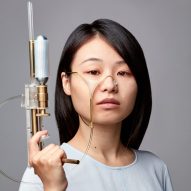 Eindhoven graduate designs a gun for firing her tears