Architecture firm dRMM won the UK's biggest architecture accolade for their work on the revival of a century-old seaside pier in Hastings. RIBA president and jury chair Ben Derbyshire called the work of the studio, led by architects Alex de Rijke, Philip Marsh and Sadie Morgan, a "masterpiece of regeneration and inspiration."

Meanwhile, Snøhetta's plans to give the iconic AT&T Building a scalloped glass frontage were met with a fierce backlash. A small crowd of architects and preservationists protested outside the skyscraper on Friday, with placards that read "Hands off my Johnson".

Herzog & de Meuron unveiled two new projects – a residential tower surrounded by landscaped gardens on the site of a former gasworks in Stockholm, and plans for a new £108 million campus for the Royal College of Art in London.

Also in the UK capital, a 20-storey hotel tower by Carmody Groake was granted planning permission for Paddington, in anticipation of a new Crossrail station opening in the area.

Over in San Francisco, the work of late gay rights activist and politician Harvey Milk will be recognised with a stepped memorial by US architecture firm Perkins Eastman.

In other news, an events company apologised for its use of "inappropriately dressed" promotional models at this year's UK Construction Week, and Burberry president Christopher Bailey announced his plans to leave the fashion powerhouse after 17 years.

Popular projects on Dezeen this week included a cafe in Hanoi with a fish pond and indoor waterfall, a Toronto home with a plywood storage unit and integrated dog bed, and a stool that explodes if sat on for too long to defuse awkward situations. 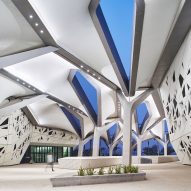