Launched earlier this year, the two pieces –  a coffee table named Metsing, and a side table named Kaggen – are part of an ongoing collaboration between the artist and the design studio.

Each piece in the collection refers to a character in South African mythology. The Metsing coffee table is named after the Sotho term for "place of water", and features three interconnected pool-like surfaces that form the table top.

The Kaggen side table translates as "praying mantis", which is referenced in the design's arthropodic form.

"The ideas came about from words and feelings rather than drawings and sketches," Tshikare told Dezeen. "It was about tuning in and translating an almost spiritual concept into something tangible and present."

Both pieces are designed to look like pools of water suspended in mid-air, and feature hand-sculpted frames combined with thick glass inserts that form the tables' surfaces.

The frames are coated in patinated bronze and were made using a technique named "lost wax" whereby metal is cast in a wax-coated mould. The glass was tinted blue, to make it appear more like water.

"We tried to use materials that were natural, beautiful, strong – and yet delicate," the designers told Dezeen. "We wanted to be able to physically sculpt and individualise each component of the pieces, making them truly unique."

Both designs were hand-crafted by local artisans and are limited to 16 pieces. They are part of an ongoing fictional narrative co-written by Tshikare and his wife, which will be published in 2020.

"With each show, I will present new works that elaborate and extend further into the tale," Tshikare said.  "This tale will continue through into 2020 with multiple works in various mediums, exhibited worldwide."

Tshikare is the founder of Zabalazaa Designs, whose previous work includes a chair made from scorched timber and woven grass, while Okha is a design and interiors company based in Cape Town. 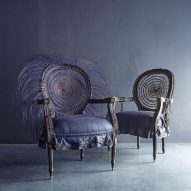