To encourage the occupants of this house to socialise with their neighbours, Japanese architect Takanori Ineyama added a patio deck, a first-floor balcony and a large bay window to the building's facade.

Ineyama designed Tab House for a young family who recently moved out of Tokyo, in favour of a more rural setting in Yamanashi Prefecture.

The architect was himself born in the area but had moved to Tokyo to study architecture, before later returning to set up his practice. So he knew that integrating into a rural community, after previously living in a big city, can be hard.

To help the clients adjust to this big change, he designed a house that encourages them to venture outside. It does this by extending the living spaces out towards the garden, where they are visible to neighbours.

"We attached a margin space to the facade of the house, which is in contact with the area, such as large observation deck and the edge, and bay windows," said Ineyama.

Sliding doors can be pulled back to connect the house's main living space with the patio deck, while the balcony forms an extension of a first-floor mezzanine, containing a more secluded lounge and a study.

The large bay window fronts a traditional "Japanese-style" room, which is slotted beneath the mezzanine, and which also features fusuma-style sliding doors and a floor covering of tatami mats.

"We thought that opening the owners' behaviour will increase the opportunity to come in contact with the surrounding residents and surrounding nature," said Ineyama.

The layout of the interior is fairly straightforward, organised around the double-height living space. The kitchen is located on the opposite side of the plan to the tatami room, and is framed by a second mezzanine that accommodates two bedrooms.

Large windows on all sides provide views out over the leafy neighbourhood. Other details include exposed timber columns and beams that provide bookshelves, and a colour palette that includes dark greens and greys.

The region can be cold, so the house is also fitted with a system that blows hot air up from under the floor, to distribute it throughout the open-plan interior.

"The whole family uses the energy efficiently by sharing the indoor environment in a large space," explained Ineyama.

Ineyama was previously a partner of ON Design, before starting his own firm. Previous projects include a house with a huge tiled roof that integrates openings for tree branches and a property that is divided into two halves. 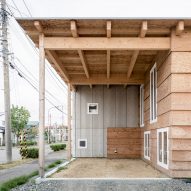