Norm Architects has made its first foray into the cycling industry, collaborating with Danish Network Association and MediaGroup Worldwide to release a range of electric and manual bicycles.

The trio of companies, known collectively as Copenhagen Bike Company, have released a collection of both normal and electric bicycles in the hope of encouraging people to take up cycling as a means of transport, particularly in urban areas.

With Copenhagen Bike Company, Norm Architects hopes to utilise its design skills to create a range of minimal – but durable – bicycles.

Every model is hand-built from scratch and can be tailor-made to suit the cyclist.

The bicycles come in a range of colours including creamy beige, metallic grey, deep blue and pure black.

They all follow a traditional design – featuring wide tyres, a curved frame, a soft leather seat and a wide leather-covered handlebar.

The bike's mechanism is covered by a protector, which curves along the chain discretely and contributes to its minimalist design.

"The bicycles are designed to stand out and blend in at the same time. We wanted to create a product that was classic and timeless in its design but refined in all details."

The Danish practice's decision to move into the cycling industry was underpinned by the idea that cycling could help "improve the quality of life for people".

As air pollution and Co2 emissions continue to rise across the globe, the studio aims to encourage individuals to adopt a more environmentally friendly mode of transport.

They claim that cycling is a dynamic way to travel and want to make it easier for people to move through the city in "a quick, easy and sustainable way".

"We have a strong belief that bicycles are the way forward for people living in metropolitan areas around the world," said Jonas Bjerre-Poulsen, founder of Norm Architects.

"Bicycles are all about a cool and sustainable mode of transport. Biking is, and will continue to be in the future, the optimal way to move around in big cities. It's cheap, healthy, relaxing, extremely environmentally friendly and offers a unique mobility" he continued.

Norm Architects was founded in 2008. Since then, the studio has completed a number of projects across interior, architecture and industrial design. 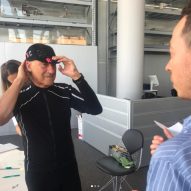 Norman Foster teams up with Rapha to design cycle wear

It previously designed a range of minimal bathroom furniture for Ex.t and hacked IKEA flat-pack kitchens for Danish company Reform.