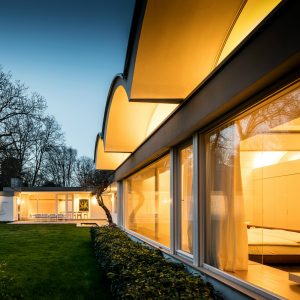 A bungalow is a type of house. Its definition varies around the world but in the UK it is typically a single-story dwelling that is usually detached, with a sloping roof, and often modest in size. In many parts of the world bungalows also feature verandahs and loft rooms. Its compact, stair-free form and makes it particularly suitable for retirement homes and for people with impaired mobility.

The word “bungalow” derives from the Hindi word “bangala”, which means “Bengali”, since the architectural form was typical of the Bengal region. The word entered the English language in the seventeenth century when “bungales” were built to house sailors from the East India Company.

Today contemporary architects are playing with the traditional bungalow form by introducing features such as flat roofs and materials such as concrete and glass.