Oregon-based architect Erin Moore has completed a tropical getaway in Hawaii that consists of two pavilions sited on either edge of a 300-year-old solidified lava formation.

Situated at a high altitude on the island of Maui, with a cooler climate than the city below, Outside House is used by the client as a retreat for short periods of time.

"The Outside House is a place to live outside," said Moore, who runs a design-and-research practice called FLOAT. "Two small pavilions shape the basics of daily life and structure an intentional relationship with the land."

The first pavilion – located to the south – contains a bed, a small desk, and a reading nook. As opposed to the other structure, this cabin is fully enclosed.

"This pavilion is a tiny detached bedroom oriented to look up the lava flow and catch the first light of sunrise over cinder cones," said the architect. "After that brief morning sunlight, the room is in cool shade for daytime reading and napping."

Clad in wood and polycarbonate, the simple frame construction has built-in vents that allow for ample air circulation. It is raised from the ground on four concrete blocks, minimising its impact on the site.

Further away, a covered platform provides the residents with a small outdoor kitchen, terrace, and shower, all of which are open to views of the Pacific Ocean and the neighbouring island of Kahoolawe.

The structure of the service pavilion is made up galvanised steel, which was carried to the site by hand and assembled on the spot. "In keeping with the client's stewardship of the land, the pavilions are designed to be minimally connected to the ground and to be demountable," the architect said.

Preserving the land between the two pavilions was critical to the design, as the client has a long relationship with the site. Therefore, the space was left in its natural state.

"Her earliest memories of the place are of crawling through lava tubes near the now-endangered wiliwilis – Hawaiian trees historically used for canoe floats," said the architect. "The unbuilt areas of the Outside House — lichen on the lava, a curved rock wall, a growing endemic Mamane tree – are the essence of daily living in this place and what the client values most."

Outside House was completed in January 2017, and was awarded the first prize in the Building Voices competition, which recognises quality design on the tropical archipelago.

Other projects in the US state include a home overlooking the ocean with an undulating roof that people can climb up onto, and another tiny cabin that sits at the foot of the world's most active volcano.

Photography is by Oliver Koning. 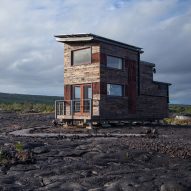