There are practically no doors in this Hawaii retreat by Craig Steely Architecture that has a triangular inner courtyard, massive skylight and a cantilevered roof.

The house earned its nickname, Musubi, from one of the builders who remarked that its triangular shape resembles the popular Japanese rice snack also known as onigiri.

It is sited amongst 100 acres of grassy, rolling hills, facing North on the slopes of the Mauna Kea volcano in Pa'auilo, on Hawaii's Big Island.

"The owners requested a house that embraces the nature of the windswept grasslands of the Hamakua coast," said San Francisco studio Craig Steely Architecture.

Though the low-slung roof is quadrilateral, the living areas were placed in a rounded triangular floor plan.

"The diagram of the house is simple—an outdoor triangle within an indoor triangle supporting a diamond-shaped roof," said Craig Steely Architecture.

Residents arrive via a garage on the lower level, where a spiral staircase illuminated by a skylight leads to the home's main level.

The overhanging roof is helpful as the area's weather can be unpredictable.

"The elevation creates a weather dynamic that can swiftly switch from brilliant cloudless blue sky to horizontal windblown rain within minutes," the architecture studio explained.

A central courtyard helps delineate the interior spaces, and sliding glass doors create a continuous space that runs through the centre of the entire home.

"The triangle-shaped atrium in the center provides an outdoor room between these zones with a floor of cut Pahoehoe lava," said Craig Steely Architecture.

"This protected space is usable in windblown fog or bright sun—a true extension of the interior space without a roof," the studio added.

The three main areas of the home are located within the rounded triangle's corners, which are made of cast-in-place concrete.

There is a sunken living room, a kitchen and dining area, and two bedrooms.

"These concrete curves designate the three zones of the house," the architects explained. 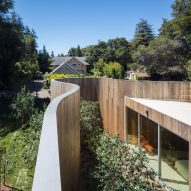 On the glazed courtyard wall facing the bedrooms, the architects included plenty of plants, which protect the occupant's privacy.

"A landscape of Hapu’u ferns and Rhapis palms create a layer of veiled privacy to the outdoor shower and bedrooms off the atrium," said Craig Steely Architecture.

The exposed concrete structure is visible throughout the interiors and complements warmer accents such as a wooden ceiling and bright furnishings.

"The clients’ willingness to prioritize permeability over privacy gave us the freedom to create a plan without doors or hard boundaries," Craig Steely Architecture explained.

"Spaces flow from zone to zone while always remaining in visual contact with the rolling landscape," the studio added.

Other homes in Hawaii include a villa built atop a crystallised lava flow by De Reus architects and a low-slung home made up of four gabled volumed by Walker Warner Architects.

The photography is by Darren Bradley.