Studio Roosegaarde has restored a set of flood defences in the Netherlands, impregnating the floodgates with a new retroreflective material that glows in the headlights of oncoming cars.

The Gates of Light are the permanent part of the Icoon Afsluitdijk exhibition on a 32-kilometre dike, along with two temporary installations that will run from November to January.

Daan Roosegaarde and his team were commissioned by the Dutch State and governing bodies of the local regions to repair the historic floodgates and imbue them with iconic status.

"Dikes in the Netherlands are as holy as cows in India, normally you cannot touch them," Roosegaarde told Dezeen.

"We looked at a design that wasn't about adding objects, but about enhancing what is already there. They are beautiful buildings, they're shaped like temples."

Originally designed by architect Dirk Roosenburg in 1932 and built mostly by hand, the Afsluitdijk is a dike that doubles as a causeway stretching from Den Oever in North Holland Zurich in Friesland province.

The dike forms a central part of the Zuiderzee Works, a system of man-made flood defences that protects the Netherlands, most of which sits below sea level.

The sea barrier is exposed to the elements and much of the existing concrete structures had rotted through.

As well as restoring them, Studio Roosegaarde wanted to find a way to turn the structures into light sculptures, but there were several obstacles to overcome. Traditional methods using electric lights and cables would quickly deteriorate exposed to wind and saltwater.

The team was also determined to avoid adding any light pollution that might disturb local birdlife or contribute to the consumption of fossil fuels.

Global warming, after all, is directly responsible for the rising sea levels threatening the low -lying Netherlands. So Roosegaarde turned to nature for inspiration.

"We looked at the wings of butterflies, how they use reflection to create colour. It's very interesting, it's not pigment so it doesn't fade away," he said.

The team spent three and a half painstaking years developing durable micro prisms to coat the surface of the floodgates.

"We also wanted to make something that would last for 50, maybe 100 years," said Roosegaarde. "It was like a puzzle, the restrictions pushed the design."

When cars drive along the causeway at night their headlight beams catch the material, reflecting the light back at them. The effect lights up the outline of the monumental floodgates on each side of the road.

The effect might be sci-fi, but Roosegaarde hopes the project demonstrates a very real and pertinant way of thinking about designing with light.

"You're highlighting the blueprint of the architectural history, and at the same time you are making a futuristic statement about energy friendly, energy neutral landscapes," he added.

The Icoon Afsluitdijk exhibition also includes Windvogel, smart kites that create green energy as they twist in the wind through a dynamo generator attached at the base. The string of the kites are luminous, so they glow in the dark.

"You have these beautiful dancing lines of light floating in the air and at the same time producing green energy," said Roosegaarde.

Windvogel was conceived when Roosegaarde came across a project in the archives dreamed up by the late Dutch astronaut Wubbo Ockels.

Ockels, who died in 2014, had started developing an electricity generating kite. Studio Roosegaarde worked with his widow and a spinoff of the Delft University of Technology to realise the kites, which can generate 100 kilowatts of electricity.

Another installation, called Glowing Nature, demonstrates the potential of using bioluminescent algae as a natural light.

Studio Roosegaarde spent two and half years nurturing their algae population. Under the correct conditions, the single-celled organisms emit light when touched.

The team flooded one of the historic concrete bunkers on the Afsluitdijk to create a temporary space where visitors can interact with the algae.

"It's a statement about the future of light. What can we learn form nature, how can we make things more natural? It's also a very intimate, very personal experience," said Roosegaarde.

"I love to make things that have this poetic, but at the same time very practical attitude. Maybe that is also a Dutch thing."

In an interview for Dezeen's Good Design for a Bad World project Roosegaarde called on fellow designers to ditch creating luxury items and focus on solving issues such as pollution.

A few months ago Studio Roosegarde unveiled the Smog Free Tower in Beijing, a 7-metre tall air purifier they hope could hoover up the Chinese capital's deadly pollution problem. 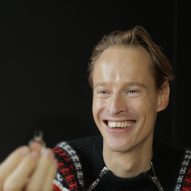