Brazilian architecture studio TRIA Arquitetura has overhauled a 27-square-metre apartment in São Paulo, with the aim of making the space more adaptable to its tenants.

The project was carried out for a client who wanted maximum flexibility built into the scheme, so that the tiny apartment could be moved around to suit the needs of its tenants.

In order to create a space that felt like a home, rather than a hotel room, TRIA Arquitetura founder Sarah Bonanno said she and her team wanted to create distinct spaces for each particular living function.

The flat was also extended to incorporate an additional seven square-metres, while a perforated concrete brick wall was built to create a sleeping niche for the bed.

"Studios usually have minimal privacy – sometimes you walk in through the main door and see the bed, as if you're in a hotel room – and we wanted to change that and create defined environments," Bonanno told Dezeen.

The bathroom, which is located behind the bed area, was previously only separated with a glass partition.

The duo added a shutter as a simple and inexpensive intervention to provide greater privacy without blocking the light.

To maximise the feeling of space, an inbuilt Formica wood structure was designed to serve multiple functions and connect the different areas.

It starts in the sleeping area as the base of the bed, then passes through the living area as a sofa, before ending in the kitchen – where it provides table seating and drawer space.

"We chose to use the standard Formica wood as it harmonises with other shades of coatings and furniture," said Cardoso de Almeida. "In small spaces, it is vital that you don’t increase the feeling of confinement."

Most of the furniture was custom-made due to the small dimensions of the property. The architects chose colours that would enhance the feeling of space, which they used in combination with earthy tones to create a cosier environment.

"São Paulo, with a population of 12 million people, faces the same space issues as most of the big cities in the world, so many people prefer to live in smaller places that are well located," she said

Other examples of renovations in the area include an apartment by Alan Chu that features partitions and furniture made from ceramic ventilation bricks and a 1960s flat updated by Vitra Arquitecta with exposed structural concrete pillars.

Photography is by Alessandro Guimarães. 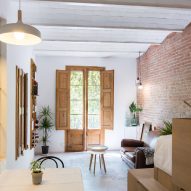