Architecture studio Russian for Fish has injected colour into the basement of a London duplex flat by installing a bright yellow kitchen.

The Beresford Road property is located in the north London borough of Islington, and is home to a young couple and their two dogs.

Occupying the lower two floors of a Victorian terrace, the duplex was formerly described as having a "dual personality".

The ground level, which plays host to two bedrooms, a bathroom and a dressing area, was spacious and filled with light – while the basement housed a series of narrow corridors and dim, vacant rooms.

The clients asked Russian for Fish to design a more welcoming basement level, that mirrored their penchant for "contemporary, gallery-style restraint".

To do this, the team created a yellow-coloured kitchen to make the space appear significantly brighter. The shade also extends through to the stairwell.

Influenced by the material palette of industrial buildings, the architects then used a light, polished concrete for the flooring and some of the basement's walls.

"Yellow is a great colour – it brings out the ochre tones of the natural concrete floor, compliments the off-white walls, and creates warmth throughout the flat, even on the dullest of days," said architect and studio founder Pereen d'Avoine.

"We felt we needed a strong pop of colour to offset the concrete used throughout the space."

Green is subtly introduced through potted plants, which were placed in several corners around the house.

As well as overhauling the basement's aesthetics, the practice also adjusted the layout to make room for new utility and shower areas, which have both been decked out with marble tiling and stainless steel fixtures.

The basement is further illuminated by a skylight that has been added to the existing side-return extension.

Finished with the client's own neutral furnishings, a wall of integrated shelving has also been created to display an' extensive collection of vinyl records. 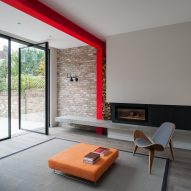