Korean designer Wonmin Park has pieced together sheets of patinated aluminium to create this collection of furniture, featuring textures that resemble paintbrush strokes.

The intersecting planes feature pale and dark hues, and a mottled texture created by patina – a coloured film that naturally forms on metal surfaces when exposed to atmospheric elements over a long period of time.

"The idea of this new collection Plain Cuts is to provide a minimalist and drastic process based on the construction of aluminium sheets with patina technique," said Wonmin in an interview with the Carpenters Workshop Gallery.

"Structures are exposed to the surface and it becomes part of the work itself," he added. "Patina on aluminium is like painting on a canvas."

Among the pieces in the collection is a long, low bench. Park has punctuated its dark top with lighter strips of aluminium that are arranged in a cross shape.

A chair, titled Box, comprises four darker pieces fitted together to form the cube-shaped seat. A slightly lighter, curving sheet is slotted through the top panel to create the backrest.

Park allowed aluminium for the legs and top of a dining table to develop a much darker hue. A series of paler narrow fins run pierce through to join these elements together.

For a console, he set legs at right angles to each other and punctured one through the top.

Another two low tables feature in the collection. Four parts threaded by a rectangular shape make up the top of one, while a single piece of metal forms the other, which is set on three chunky legs.

Also in the collection are two square tables, a series of four cube-shaped lights that hang from a block of aluminium, and a cabinet made of eight boxes stacked on top of each other.

Park, a Design Academy Eindhoven graduate, will also be presenting updated pieces from his Haze furniture series, which is constructed from translucent grey, navy and white slabs of resin.

Carpenters Workshop Gallery was founded in 2006 by childhood friends Julien Lombrail and Loïc Le Gaillard, and was first based in London and Paris, before expanding to New York City in 2015. 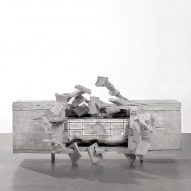