Korean artist Wonmin Park is exhibiting a new table and bookcase from his resin furniture series at the Carpenters Workshop Gallery in Paris.

The new pieces were developed over the course of several months at the gallery's research space in Roissy, Paris, and are a "continuous evolution" of the Haze series that Park has been developing since 2013.

The table and shelves are constructed from translucent grey, navy and white slabs of resin – a material characteristic of the artist's work. 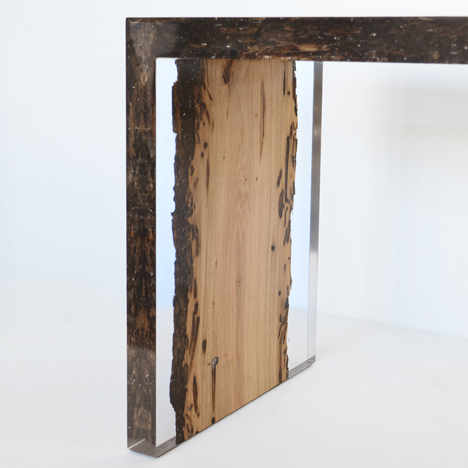 Four elements make up the table: three rectangular slabs which form the legs, and a translucent white tabletop.

"The transparency is a way of capturing the feeling created by haze, whether it is from foggy weather, fire or the blurring of your eyes," Park told Dezeen. "I wanted to recreate the way that nature plays with light such as the phenomenon of rainbows and the prism caused by the morning sun's reflection on a drop of dew."

"I started research to discover why these experiences are beautiful and find a way to show this quality turning lightness into a physical form," he added.

The four-shelf bookcase is composed of several thin panels of grey resin, with supporting navy, dark grey and white columns. 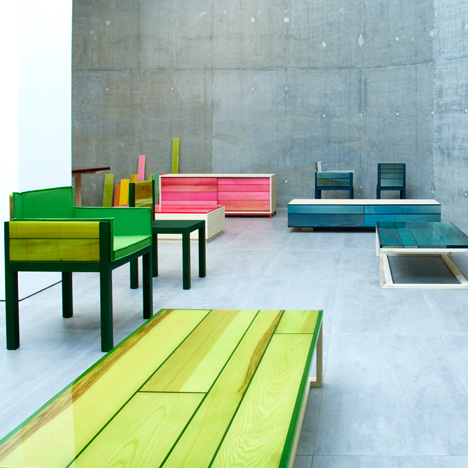 The new works will be exhibited alongside other Haze pieces that Park first presented at an exhibition in late 2013. All the pieces are cast from resin, which Park described as "the natural material to use to recreate the sensation of fog or haze".

The artist mixed the colours by hand to control the intensity of the pigment during the casting process before adding them to moulds. Resin is then poured in to form each section of the piece of furniture.

Because of its translucency, the contrasting colours of the elements of each piece are exposed in the joints of the furniture where the slabs of resin meet.

Despite their fragile appearance, the pieces are intended to be used as practical items of furniture. "His designs sit on the axis between minimal and practical, but always contain an element of dissonance that creates a sense of balance and tension within the work," the gallery said in a statement.

"Visitors will see the technical challenges I overcame to achieve this," Park added. "It's part of the design and reflects my aesthetic style and my idea of beauty."

Park, who is a Design Academy Eindhoven graduate, has shown his work at major fairs worldwide including Design Days Dubai and Design Miami. He has also had his work included in shows in Paris and Milan, and his home city of Seoul. Park has had a studio in Eindhoven for the last nine years.

This new exhibition takes place from 10 September to 14 October at the Carpenters Workshop Gallery in Paris.

Italian design group Nucelo has also experimented with resin to create furniture for Ammann Gallery, while Nameless Archtecture reinterpreted the traditional Korean door with a mix of resin and flexible silicon, for an installation in Seoul.