An exhibition at the Philadelphia Museum of Art is tracing 16 years of work by Spanish designer Patricia Urquiola, from lamps shaped like whisks to chairs covered in felt flowers.

Patricia Urquiola: Between Craft and Industry opened earlier this month and marks the first show in the US solely focused on her work, which spans architecture, interiors and product design.

A selection of works, photographs and models that Urquiola has created since establishing her studio in 2001 feature in the exhibition. Furniture, rugs and walk hangings are displayed against a peach-hued platform like miniature interior sets.

Placed towards the start of the display is the 2007 Crinoline chair, featuring a decorative pattern based on the petticoats of the 1800s.

Hanging behind is the designer's Fishbone Inlay, comprising marble and other semiprecious stones arranged in a parquet patter. Urquiola sourced the material for the piece from leftovers following the 2012 earthquake that hit Italy's Emilia-Romagna region.

Among other products on display is the Antibodi Chaise, which she completed in 2006. The chaise-longue is covered with flowers made of felt petals.

The porcelain Landscape Tea Service is displayed in a glass vitrine beside, including the teapot, cup, milk jug and sugar pot, all with a flowery handle.

A small block juts out from the back wall to support the Chasen Hanging Lamp. The light's curved wire shade is based on the bamboo whisks traditionally used in Japanese tea ceremonies.

Urquiola's other unusual inspirations include a ring, which informed the curved opening the base of the wire mesh Bague table lamp.

"Urquiola is part of a new generation of designers who take a humanistic approach to their work," said museum curator Donna Corbin in a statement.

"She is known for exploring the possibilities of the artisanal through new technologies, to achieve something that feels familiar and evokes a sense of comfort."

More recent products in the exhibition include the Gender armchairs and the Beam Sofa System, which Urquiola released as part of her first collection as art director of Italian furniture company Cassina, and the Openest office furniture she designed for Haworth.

Urquiola, who was born in Spain in 1961, was the highest ranking female designer in the Dezeen Hot List, released last year.

She has served as the Cassina's art director since 2015, while her studio has created store interiors for brands such as Laufen and Panerai, and designed products for a host of brands like Moroso, B&B Italia and Kartell.

Patricia Urquiola: Between Craft and Industry will be on display until 4 March 2018 at the Philadelphia Museum of Art, 2600 Benjamin Franklin Parkway. 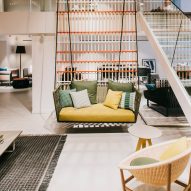