American artist and designer Misha Kahn has gathered trash from the beach and turned it into objects that resemble sea creatures for an installation at New York gallery Friedman Benda.

Brooklyn-based Kahn gathered the materials for his exhibition from Dead Horse Bay – an inlet near to the Rockaways beach in Queens. The bay is home to landfill for New York City's garbage, and trash has spilled onto the sand, making it a treasure trove for artists.

To these found objects, Kahn has also added concrete, glass, metals and grass, which he applied using a variety of techniques such as weaving, metal cladding, glassblowing and bronze casting. The result is a series of bizarre-looking pieces, from the spiky Squirm hanging light with furry ends and a twisted glass tail, and the spindly, skeletal bronze frame of The Wanderer's, to the Miss Fishy chair shaped like a fish bone.

Kahn titled the installation of works – which is currently on show at Friedman Benda's gallery in Chelsea – Midden Heap, after the piles of debris known as middens that octopuses create from leftover food to hide their homes.

"The Giant Pacific Octopus is such an amazing creature," said Kahn. "It can camouflage itself, get rid of predators by spraying them with black ink, regrow a limb and — most insane of all — decorate its front yard."

"Incorporating aquatic treasures, as well as the carcasses of their prey, they create scrappy underwater facades known as 'midden heaps'," he continued.

"For this show, I, too, collected crap from the sea that caught my attention: clusters of bags had been so entangled with each other that they now looked like kelp, a toilet seat became a textured shell, shards of broken bottles became so wobbly and deformed they looked like translucent calamari."

The collection of abstract objects follows on from the pieces that Kahn presented for Friedman Benda at last year's Design Miami fair. It includes his Scrappy Cabinet that he made from grass, trash and stained glass alongside basket weavers in Swaziland, Africa and the range of blown glass and metal chandeliers.

For Midden Heap, pieces are shown in two distinct areas. One is raised on a weathered wooden deck with objects placed in patches of soil. It is dimly lit, apart from spotlights in orange and red hues.

Rougher and darker objects occupy this moodier side, while brighter, more brashy works are placed towards the front of the gallery and lit by natural light from the windows. These include Not The Way It Was Left, which is bright pink and crab-shaped, and the steel and coloured glass Liquor Locker cabinet.

There are also a pair of steel floor lamps with pink glass bulbs shaped like hands, a matching pendant light, and a pearlescent blue sofa covered in orange blobs. 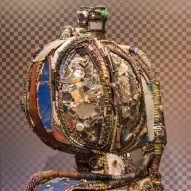 Misha Kahn's Scrappy Cabinet is made from trash and woven grass

Photography is by Dan Kukla.