American designer Misha Kahn worked alongside basket weavers in Swaziland, Africa to create this cabinet made from grass, trash and stained glass found on a beach.

Kahn's cabinet featured among a collection he showed with the Friedman Benda gallery at the Design Miami fair last month, where maximalist design "for apocalyptic times" was a recurring theme.

The New York-based designer based the Scrappy cabinet - regarded by many visitors as the standout object at the fair - on the "sense of a treasure hunt", using a number of unusual materials to create the abstract form.

"The process of weaving a basket makes everything feel so precious to me because it's so methodical and slow," he told Dezeen. "In a way weaving with trash felt like a nice way to disrupt that, but also make the trash very precious."

Working with a collective of basket weavers in Swaziland, a landlocked country in southern Africa, Kahn used grass to form the main woven structure.

However, as the country is facing a severe drought and grass is scarce, Kahn had to find a second material help shape the cabinet and introduced pieces of rubbish.

The trash was then incorporated into the weave, with larger parts forming the cabinet doors and smaller parts adding colour and decoration.

Pieces of stained glass found on a beach were used to add further decoration to the two semicircular doors.

The Scrappy cabinet is the latest piece by the designer, who describes his aesthetic as "uncomfortable".

"If I know I like something it won't keep my attention to finish it – so things that strike me as a little cheesy, like stained glass, provide a nice challenge to keep working against," he said.

Born in 1989, Kahn often works at the intersection of art and design. He graduated from the Rhode Island School of Design in 2011 and was awarded a Fulbright Fellowship at the Bezalel Academy of Art and Design in Tel Aviv the following year.

He currently lives and works in Brooklyn.

Kahn presented his Scrappy Cabinet alongside an installation of chandeliers made from blown glass and metal at Friedman Benda gallery's stand at the Design Miami collectors' fair.

His designs mirror others in the fair, which for the last few years has been dominated by mid-century French and vintage furniture but was this time filled with more experimental pieces.

"There's a big push back against the era of good taste," he said. "I do think there's an apocalyptic zeal in the air and people are kind of saying f*ck it – why not buy something insane and put it my house." 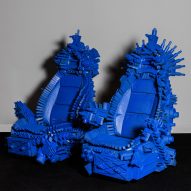 Photography is by Adam Reich.