Hospitality design in Dubai is becoming more restrained as hotels aim to appeal to a broader range of guests, say AHEAD MEA jury members in this movie Dezeen produced for the hospitality awards programme.

The AHEAD MEA awards, which took place last month at the W Al Habtoor City hotel in Dubai, celebrated the best in hotel and resort design across the Middle East and Africa.

The region – especially Dubai – is renowned for building big, extravagant luxury hotels, but the judges of the awards programme say that this is changing.

"We get a lot of bad press in the region for building the fastest, the shiniest and the boldest structures," says Dubai-based interior designer Pallavi Dean in the movie, which Dezeen filmed at the awards ceremony.

"Now we're shifting to creating these big bold structures, but doing it tastefully. We're keeping the context and the narrative within play at the same time."

The Four Seasons DIFC hotel at the Dubai International Financial Centre won the most prestigious prize of the night, being named AHEAD MEA Hotel of the Year, as well as winning the Urban Hotel category.

The hotel, designed by renowned hospitality designer Adam Tihany, is a conversion of a former apartment block. While being a luxury five-star hotel, Tihany's aim was to create a much more intimate experience for guests than is usual in Dubai.

"The Four Seasons has done very well," says AHEAD MEA jury chair and chief operating officer for the Jumeirah Group Marc Dardenne. "It has a really nice feel – very residential and very polished."

Dean adds: "Yes it's a business hotel and it's for the corporate, serious, DIFC crowd. But it's also fun. It has a lot of F&B outlets and it has a great entertainment deck on the rooftop."

One of the other big winners of the night was mid-market hotel Rove Downtown, which won the Event Spaces category and was named New Concept of the Year.

The hotel is an example of a host of new properties in the region that are aiming to appeal to a younger, less affluent demographic, according to Dardenne.

"We have seen a new trend with lifestyle hotels, which is really a segment that is up and coming in the region," he says. 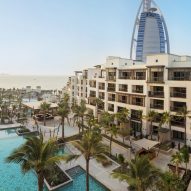 "The Rove Hotel is really interesting because it's a new typology for Dubai," says Dean.

"It's aimed at a completely different demographic and what it does really successfully is integrate local art. Throughout the lobby there are these carefully curated art installations – it is as if the artist is taking the travellers at the hotel through a journey through old Dubai."

Dean gives the Jumeirah Al Naseem in Dubai as another example of a hotel that has worked with a local artist in an attempt to create a more authentic experience for guests. The five-star resort won the Guestrooms and Resort Hotel categories at the awards.

"The Jumeirah Al Naseem resort takes the connection between art and design to a whole new level," she says. "They have commissioned Emirati artist Mattar Bin Lahej to create these beautiful sculptures and paintings within their lobby."

According to Isabel Pintado, senior vice president in the Middle East and Africa for Wilson Associates, the increasing competition amongst hotels in the region is driving the trend towards more considered designs.

"As more and more hotels have come up, the competition between them has become an awful lot stronger," she says.

"There is a need to be really quite sharp, because otherwise the hotel next door that has just opened will eat you alive."

This movie was produced by Dezeen for AHEAD. All images used in the movie and this story are courtesy of AHEAD.

More from the AHEAD awards