Bompas & Parr and John Booth are among the designers and artists commissioned to create a totemic sculpture for International Peace Day, which will then be auctioned off for charity Amnesty International.

Launched at London's Protein Studios last month, the project has seen a group of designers and artists come together to make visual representations of the work that Amnesty International charity supports.

The project was curated by online publication They Made This. The team selected designers whose work best represented Amnesty International's ethos of hopefulness and positivity, including Bompas & Parr, John Booth, Damien Poulain and Marcus Walters.

"When curating projects, we are always looking for bright, colourful graphic artists who encapsulate the sense of hopefulness and positivity that charities like Amnesty International bring," Aine Donovan, founder of They Made This, explained.

Bompas & Parr, known for their playful food design and immersive experiences for brands, created a totem that features a golden inflatable air dancer constructed from Mylar – the material used in emergency rescue blankets.

"The dancer moves unpredictably, buffeted and guided by both its own internal forces and the wind of its environment," said the London-based studio. "Dancing in sorrow and dancing in joy, dancing in resilience, always dancing," Bompas & Parr said.

Other sculptures featuring in the exhibition include a stack of brightly-coloured letters spelling "peace" by artist Gemma Tickle and a traditional totem with peace motifs by London-based graphic designer Damien Poulain.

Isabel and Helen, a set and installation design studio, covered their tree-like totem with miniature fans, and designers Rhoslyn Butler and Kester Hoefkens came together to create a seemingly architecture-inspired totem.

Studio Rude decorated pieces of wood to read "lucky to be free, free to be lucky", and Marcus Walter's piece sees two hands raising up from a rainbow.

Each of the totems will be exhibited at the Amnesty International headquarters in Shoreditch until 11 December 2017, before moving to Londonewcastle’s Gallery 46 in Whitechapel on 14 December.

An online raffle for each of the sculptures will then be drawn on 20 December, with proceeds going to Amnesty International. 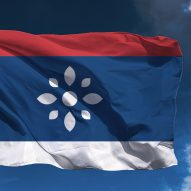