Amsterdam-based Studio Drift has choreographed 300 drones to mimic a flock of birds over the beach during this year's art week in Miami.

The artwork was created by Lonneke Gordijn and Ralph Nauta of Studio Drift, who programmed the drones to simulate natural murmuration behaviour seen in starlings and other birds.

Mounted with lights, the drones swarmed in formation over the beach – their movements dictated by algorithms.

Studio Drift uses algorithms in much of its work, such as an artificial tree installed at this year's Burning Man festival that illuminated with "light flocks".

"Everything can be simulated in animation and virtual reality, but we think there is an importance in creating real experiences that you can feel and see with your own eyes in the real world, not only through a screen," said Gordijn.

The duo has been studying flocking behaviour as part of an ongoing research project, and developed software that was uploaded to the machines to predetermine their flight paths.

During the performance, the swarm moved slowly over the ocean towards visitors watching on the beach.

Franchise Freedom premiered during Miami art week, coinciding with the Art Basel fair and a host of other events across the city, including Design Miami.

The performance will take place every night from 7 to 10 December 2017 at 8pm, weather permitting, above the sea between 32nd and 33rd Streets off Collins Avenue.

Choreographed drones were also used to kick off this year's Superbowl half-time show, when they created light patterns in the sky behind Lady Gaga. 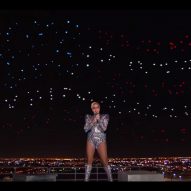