Self-taught designer Tom Givone has extended a white house in rural America with a warped metal-clad addition that starkly contrasts the traditional architecture.

Originally built in the 1850s in the Pennsylvania countryside, Twisted Farmhouse now includes a two-storey extension wrapped in a silvery exterior.

Givone teamed up with JRA Architects in nearby Scranton to design the five curving columns that make the structure's undulating walls possible.

The addition is clad in strips of anodised aluminium, laid horizontally, which both echoes and contrasts the farmhouse's original white clapboard siding.

The owner grew up in an old farmhouse across the street with seven siblings, and one of her brothers still lives there today. The extension's unusual shape is intended to sculpturally express this dynamic.

"I imagined this family bond as a physical force, like a gravitational field between the two homes, acting on the addition and 'pulling' it towards the original farmhouse across the street," said Givone.

Steel used in the construction was sourced from a company in Chicago, which specialises in designing rollercoaster tracks.

A porch was enlarged, with new railings made from thin stainless steel cables. The airy, metallic material helps visually link to the silvery addition, while opening up views a large backyard to interior spaces.

Upon entering the house is an open-plan living room, dining room and kitchen. A small bedroom and bathroom complete the ground-floor layout.

The entire home has white, light-filled interiors, with original wide-plank floors that were restored by the architect himself, after discovering them beneath layers of linoleum and plywood.

The curvy addition houses the dining area, with angular windows and a double-height wall to define space.

In the nearby kitchen, countertops and a custom apron sink are made from the same slab of white Carrara marble.

A staircase leads up to the open-air sitting room, with glazed half walls that look down on the eating area below. Original wall planks were re-used to construct the steps on the stairs.

On the second level are three bedrooms and one bathroom, which features a turquoise locker found in a barn in upstate New York, and a refurbished 1920s schoolhouse sink.

Hand-hewn beams were salvaged and left exposed on the ceilings above, with structural elements also incorporated into the white-walled renovation of the original interior.

Other extensions that deviate wildly from the style of the original building include an S-shaped addition to a cultural centre in Copenhagen, and an art studio in California where a white dining room appears to be growing from the timber building. 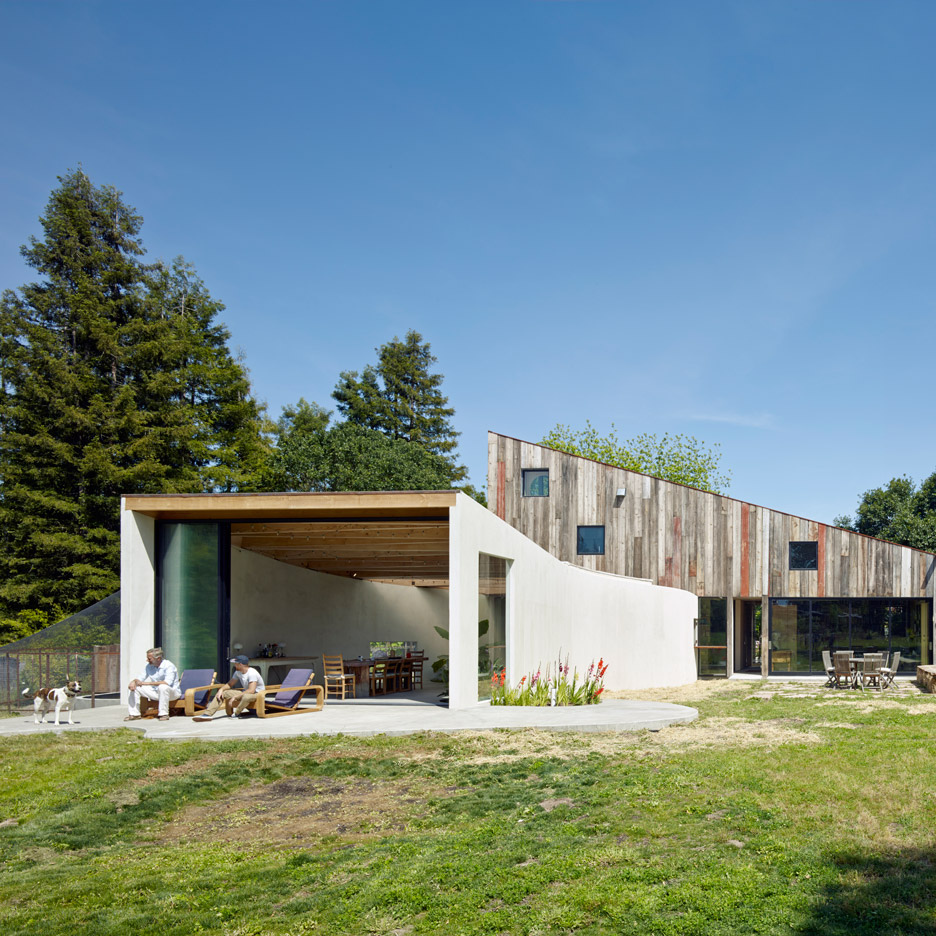