German architecture firm Barkow Leibinger has wrapped an angular showroom and office building on the outskirts of Chicago in weathering steel.

The building is for Trumpf, a German manufacturer of high-tech machinery, laser technology and other electronic tools. Named Smart Factory, the structure combines office spaces with production facilities and a showroom in two rectangular volumes.

The structure is covered in pre-weathered Corten steel and measures 57,000 square feet (5,300 square metres), with massive glazed walls and exposed beams adding to the industrial aesthetic.

The rust-coloured sheeting references the industrial past of the region, known as Rust Belt, which surrounds America's Great Lakes. Chicago sits at the western edge of the belt.

The area was once a booming hub for steel production, but has seen an economic and population decline since heavy industry has dwindled over the past few decades. Today, high-tech companies are beginning to replace the former factories.

"The history of the Rust Belt as the oldest and largest industrial region in the USA is brought together with computer-controlled high-tech production," said Barkow Leibinger.

The factory is situated in the countryside near Chicago O'Hare International Airport, among many other manufacturing and warehouse buildings.

"Against the backdrop of the surrounding industrial zones, its immediate setting appears almost idyllic: organised into two large volumes, the building gently slopes back towards a large retention pond, a reservoir within the wetlands surrounded by lawns," said the architecture firm.

"With a robust and elegant steel-glass construction, it connects the suburban 'strip' – characterised by fast-food culture, shopping centres and gas stations – with the design language of local campus and industrial buildings by Albert Kahn and Ludwig Mies van der Rohe."

The two rectangular units are linked at their corners, with additional outdoor areas at these joints. The north-facing volume includes an interior courtyard surrounded by offices, a cafe and an auditorium.

The south-facing unit houses a showroom and demonstration factory space, with digital machines that map out the entire production process, from ordering parts to design, manufacture and delivery.

Another internal feature are the custom-made steel trusses that span the ceiling. Eleven in total, these hefty structures are laser-cut and measure approximately 146 feet (45 metres) long. A raised footbridge runs along them, allowing for more viewpoints of the filigreed metalwork.

"With a height ranging from 4.5 metres to about 13 metres, the building integrates itself into its environment, a natural grassland with loose groupings of trees," the firm said.

Corten steel is a popular choice for architects designing or revamping industrial buildings. Other examples of its use include a Toronto warehouse transformed into a creative workspace and a gas compressor station in southern Denmark.

Photography is by Steve Hall at Hall Merrick Photographers. 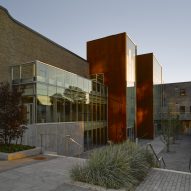