Formafantasma's Andrea Trimarchi and Simone Farresin created the furniture as part of their Ore Streams project, a two-year study into the current state of electronic waste recycling that proposes new approaches for designers working on gadgets.

While this research will be more directly presented to audiences at the National Gallery of Victoria through a series of videos, the furniture is designed as a poetic response to the findings.

The pastel-hued metallic objects incorporate decontextualised bits of electronic waste, like the casings from iPhones and laptop keyboards. One cubicle features a pigeonhole formed from a microwave, while a rubbish bin is lined with gold scavenged from circuit boards.

Several of the pieces also sport images of the surface of Mars, a reference to the extra-terrestrial origins of gold, which is widely thought to have arrived on earth via a meteorite shower.

"On a subliminal level, having the images of Mars evokes a feeling of deployed earth or an empty planet, which we thought moved the objects from being only functional to an evocative level," Farresin told Dezeen.

"We chose objects that were familiar within the office, but made them slightly odd and unfamiliar — the iPhone is under rather than on top of the table, you have the aeration grid that doesn’t serve to do anything on the leg of the table."

In addition to the table, rubbish bin and two cubicles, the collection includes a filing cabinet, desk, chair, lamp and shelf, all made primarily of dead stock.

With furniture specifically requested as part of the commission, Formafantasma decided the office environment made the most appropriate focus.

"The office is where you see the pragmatic approach of modernism in terms of quantification, use of space, functionality and so on," Farresin said.

"We feel that the same pragmatic approach based on quantification and supposed efficiency is also used with natural resources, so we thought the office was the right environment to express our investigation."

Formafantasma described the pieces as a "Trojan Horse" for their research.

"The collection of objects created for Ore Streams act as a Trojan Horse, using form and colour to initiate a deeper exploration of 'above-ground mining' and the complex role design plays in transforming natural resources into desirable products," they said.

They adopted the term "above-ground mining" in reference to a statistic that said that by 2080, the biggest metal reserves will not be underground but circulating in products or stored as ingots.

Their research project documents the electronic waste recycling process around the world, highlighting some of the issues in product design causing complications.

Based on this, the duo is encouraging designers and electronics companies to prioritise recyclability in their work, by taking such actions as improving labelling of parts, ensuring batteries and other hazardous components are easy to access and remove, considering a colour coding system that would enable different materials to be identified and sorted, and avoiding the use of glue to fix different materials together.

A number of these interviews are being shown in the NGV Triennial exhibition, which runs from 15 December 2017 to 15 April 2018.

Based in Amsterdam, Trimarchi and Farresin founded Formafantasma in 2009 after graduating from Design Academy Eindhoven. Their Wire Ring lamp for Flos was one of Dezeen's top ten lighting designs this year in Milan, while 2016 saw them produce objects inspired by Roman ruins. 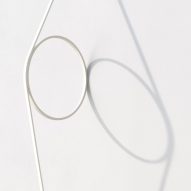