Design duo Formafantasma has collaborated with furniture brand Artek to explore the relationship between the timber and design industries in Finland through an exhibition at Helsinki Design Museum.

Called Cambio: On Finnish Forestry, the exhibition is part of Formafantasma's wider Cambio project – an ongoing investigation into the global impact of the extraction, production and distribution of wood.

The duo teamed up with Finnish company Artek to create the show, which features a mixture of work shown in previous Cambio exhibitions in the UK, Italy and Switzerland, as well as new works specific to Finland.

Featuring original films and installations as well as supporting archival material, On Finnish Forestry examines how the country's timber industry has evolved over time, with a focus on design.

"At the end of the day, it isn’t about products but about ideas."

An installation made up of stacked 1933 Stool 60 models by the late Artek co-founder Alvar Aalto intends to communicate the iconic product's lasting legacy by mixing both vintage and recently produced pieces.

The stools are crafted from silver birch, a tree species commonly found in Finland. Trimarchi and Farresin explained that Artek's local production habits influenced their desire to collaborate with the furniture brand.

"The majority of trees used in the production of Artek furniture are from Finnish forests, specifically from an area within a 200-kilometre radius from a sawmill close to Jyväskylä," explained the designers.

"We don’t see Artek just as a design company producing beautiful furniture, but as a case study on how to relate production to a specific ecosystem."

Under the Yoke is an installation comprising a postcard of an 1893 artwork of the same name by Finnish painter Eero Järnefelt that depicts a traditional scene of slash-and-burn agriculture, which is framed by chunky pinewood sourced from contemporary clearcutting.

Among the work presented in the exhibition, other pieces by Aalto include a 2022 version of his 1936 flexible room divider Screen 100 and deconstructed chair legs featured in an investigation into the designer's renowned L-leg design for furniture.

The specific qualities of birch wood was a significant influence on Aalto's desire to create an alternative to the then-popular metal tubular legs, according to Helsinki Design Museum. 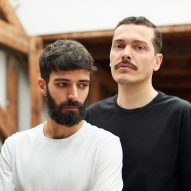 "It's not enough to ask designers to be sustainable" says Formafantasma

Trimarchi and Farresin explained that the exhibition attempts to use different media to unite audiences over the same ideas about the impact of the timber industry.

"It might sound banal, but what we want is to shift the focus from 'things' to 'context'," concluded the designers.

"We would like people to see chairs like pieces of forests and design as the outcome of political decision-making and not exclusively as the fruit of the creativity of a designer."

Known for an interest in climate change, Formafantasma has completed a number of other projects that explore the environmental impact of design.

These include the first Cambio show in London, which was commissioned by the Serpentine Gallery. Last year, the duo also redesigned its website to try and reduce "pollution connected to the internet".

Cambio: On Finnish Forestry is on show at Helsinki Design Museum from 10 June to 28 August 2022. See Dezeen Events Guide for an up-to-date list of architecture and design events taking place around the world.

The photography is by Paavo Lehtonen Photography.