Aerospace manufacturer Boeing has unveiled a huge military drone that will be used for refuelling fighter jets mid-air.

The MQ-25 is an unmanned aircraft system (UAS), designed by Boeing to refuel US Navy jets that are operating from aircraft carriers while in flight.

The company teased an image of the new MQ-25 aircraft hidden under a black cover earlier this month, before exposing it yesterday, December 19 2017.

Featuring a stingray-like appearance, the jet is designed to refuel a range of jets, including the Boeing F/A-18 Super Hornet, the BoeingEA-18G Growler and the Lockheed Martin F-35C.

Boeing said the drone will be "changing future air power".

The UAS is Boeing's entry to a US Navy competition, which called for "robust organic refueling capability to make better use of our combat strike fighters and extend the range of our aircraft carriers".

According to news website New Atlas, it is competing against American aerospace and defence company Lockheed Martin and aeronautics firm General Atomics Aeronautical Systems for the contract.

Boeing has kept most details about the new aircraft under wraps. However the Metro newspaper reported that the jet will be powered by electricity alone – following in the footsteps of the "world's first" electric jet plane, which launched earlier this year.

It is expected to be able to reach flight speeds of around 345 to 460 miles per hour.

Boeing is yet to test its new model, but insists it will be ready to start straight away, if it is awarded the contract.

"Our expertise gives us confidence in our approach. We will be ready for flight testing when the engineering and manufacturing development contract is awarded," he added.

The MQ-25 is the latest in a series of large-scale drones to launch in recent years. Others include the unveiling of the world's first passenger-carrying drone, in early 2016, and the development of the world's smallest flying car, earlier this year. 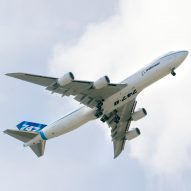