California firm Belzberg Architects has wrapped vertical aluminium strips around the outside of an office building in Mexico City, which continue inside to form various nooks and private areas.

Based in Santa Monica, Belzberg Architects used a set of curving aluminium strips that were custom-made in California to frame the structure.

"We used the prominent corner siting of this six-storey building as a prompt to explore the function and form of its two street-facing elevations," said the studio. "While maintaining the maximum useable floor area, we created a fluid, habitable facade that counteracts the project's otherwise rectilinear geometry."

Covered in dark glass and metalwork, the building stands out from the surrounding concrete blocks, yet its curvy lines offer visual interest across its otherwise boxy design. Laminated grey windows reduce heat gain, as well as improve interior visibility during the day.

"The maximum gap between each portion is a 1/4 inch (0.63 centimetres), to maintain the appearance of a continuous vertical line," said the firm. "The design allowed for a total of only three inches of tolerance across seven connection points (ie as a single vertical crossing six floors)."

Inside, these silvery strips are incorporated into the layout to form private spaces for working and relaxing. Lightly stained wood covers the floors and ceilings, while other walls include exposed concrete, white-painted, or matching wood finishes.

Outdoor porches are also formed from the external aluminium strips, which create semi-protected balconies on the four corners.

"This link between the internal and external experience of the building from the street fosters a positive reciprocal relationship between the building and the community to which it belongs," said the studio.

The layout inside is designed around the corner street views, to maximise areas for looking out across the neighbourhood. An elevator, staircase, and restrooms are all positions along the back edge of the building.

Founded in 1997, Belzberg Architects is led by Hagy Belzberg and has also built a cooking school in Mexico City constructed of concrete, and designed for the local Jewish community. 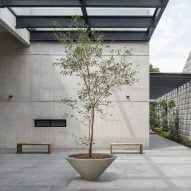