Reiulf Ramstad Arkitekter has revealed renderings for a copper ziggurat-like housing tower designed for the site of a former military camp in the Norwegian town of Ski Vest.

The Oslo-based architects designed the tower to be wrapped with linear terraces made from copper perforated with a lace-like pattern.

The top floors are shown stepped back at intervals and together with the undulations of the terraces gives the tower the appearance of a ziggurat or a Japanese wooden temple.

When completed the tower will house 50 apartments, each with high ceilings and sheltered terraces thanks to the geometry of the staggered terraces and the sequence of set backs used for the uppermost floors

The tower designed for the developer Solon Eiendom will be set on the site of a former military camp, and according to the architects the new building will blend with the existing 1980s structures nearby to form a new green neighbourhood.

Reiulf Ramstad Arkitekter is as well for its idyllic renderings of its speculative projects as it's completed work. Among them are picturesque visuals of a trio of timber and glass cabins on the Norwegian coast and a kiln-inspired learning centre in Denmark's Jutland region.

Completed works have included a network of pathways zigzagging leading to a tourist centre amongst the rugged mountains and deep fjords in rural Norway, and a jagged, mountain-like climbing centre in the country's Romsdalen Valley. 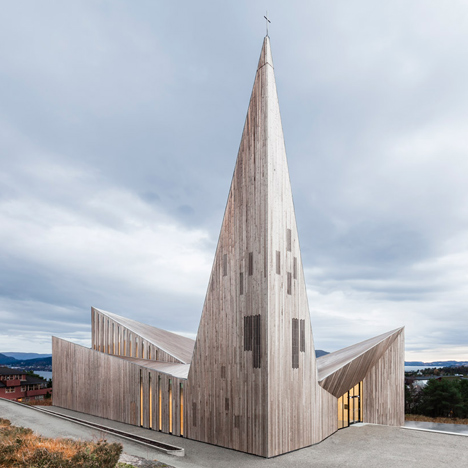