Baragaño Architects designed this prefabricated house made from galvanised steel, wood and slate in northwestern Spain to take only five hours to erect.

The Spanish architecture studio built Casa Montaña as a second home for a British landscaper and his family in the remote and mountainous coastal region of Asturias, for the total cost of  £137,952.

The modules took four months to be made in a factory in Madrid, before being shipped 600 miles over the Cantabrian mountain range to the site of an old stone granary complex.

The finished home is modern in its construction but the finish fits aesthetically with its old fashioned rural surroundings.

"[It's] technology and tradition in the days of Brexit," the architects in a statement.

The final two-storey structure is composed of three 2.15-by-5.30-metre modules. The base four modules are cubic, with the angled top four joining together to form an asymmetrical gabled roof.

The cores of the modules are composed of galvanised steel sheets clad in thin vertical wooden slats. The elements were welded together at the joins in situ, and black slate tiling was added by a local craftsman.

The ground floor is open plan, with the kitchen and living room arranged either side of a suspended white steel staircase.

To one side of the living area, a black wood-burning stove hangs against the white walls. A wooden deck runs around three sides of the house, with large glass doors and windows opening out from the living areas to the porch.

Upstairs, two bedrooms are separated by a translucent polycarbonate wall that allows light from the windows to suffuse both rooms.

Noise pollution and disruption for the rural location were kept to a minimum, as the bulk of the construction was done offsite, while the lead time reduction kept the costs low.

Sustainable materials were used in the construction and the house is designed to be energy efficient. Should the owners wish, the house can be taken apart and moved to a new location.

The architects have also made the designs open source so that any one can have their own prefabricated fast-assemble home.

Along with the financial and environmental benefits, prefabricated architecture is ideally suited to constructing buildings in hard to access locations.

In Paris, Post Office Architectes added a prefabricated barrel-vaulted extension on the roof of an apartment that provides its owners with views of the Eiffel Tower.

At the speculative end of the spectrum, creative agency Framlab has come up with a proposal for prefabricated pods to house New York City's homeless population that can be affixed to the side of a building in a honeycomb structure. 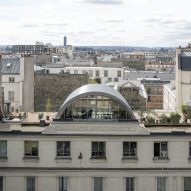