Barack and Michelle Obama have released a set of new renderings and a movie showing the cultural complex celebrating his presidency, which is to be built on Chicago's South Side.

Designed by US firms Tod Williams Billie Tsien Architects with Interactive Design Architects (IDEA), the Obama Presidential Center is planned for a site in the historic Jackson Park.

Since the initial concept sketches and layout were unveiled in May 2017, the design has been tweaked and updated based on public feedback.

"We've taken your thoughts and concerns, and reconsidered and reconceived various aspects of the campus design and the details of the architecture," said Obama in a statement. "We've reimagined the landscape plans and the recreational spaces. And we're far from finished."

The new visuals offer views of the campus and its varied landscaping, designed by Michael Van Valkenburgh Associates, which will include snaking paths to connect the buildings and other areas of the park.

The centre will split into three main buildings: a library and a forum – both partially buried – and a stone-clad "landmark" tower that will host a museum. The tower's shape is based on a photograph of four hands coming together, according to Obama.

These buildings will form a U-shape around a public plaza, which will host events. Parking facilities, a children's play area and an athletics centre are also included in the masterplan.

"When I was younger, there was a time I dreamed of being an architect," said Obama. "So, as you might guess, I've been pretty hands-on in the plans for this centre – and Michelle has, too."

Both the Obamas grew up in the South Side, which has been associated with high crime rates and poor education, and they hope that the centre will bring jobs and an economic boost to the area.

During a public consultation for the centre in September 2017, Obama urged architecture and technology firms to take on apprentices from the area to support its youth population.

"Michelle and I want this centre to be more than a building or a museum," said Obama in the recent statement. "We want to create an economic engine for Chicago and the South Side, and a cultural destination that showcases the South Side to the rest of the world."

Architects Tod Williams and Billie Tsien were selected for the project in June 2016, and the site in Jackson Park was announced shortly after. Construction is due to complete in 2021.

Each US president since Franklin D Roosevelt has had a library, archive and museum to commemorate their terms of office, and bring together documents and artefacts from their administrations. 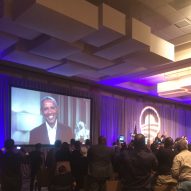