Cuban-American artist Edel Rodriguez has redesigned the front cover of the tell-all book documenting Donald Trump's first nine months as US president, with an illustration of his face as flames.

Published this month, Fire and Fury: Inside the Trump White House documents the Trump Presidency through the eyes of American author and journalist Michael Wolff.

It caused uproar for revealing White House secrets and accusing Trump of incompetency, but its cover blandly comprises a white backdrop, capitalised text in a mix of blue and red, and a picture of the president.

Having previously depicted Trump in political covers for Time Magazine, Rodriguez said he was called upon to offer a more provocative version.

"I've been asked what I would've done with the 'Fire and Fury' cover by some folks who think the existing cover design is a disaster and a missed opportunity, so here is what I might have done with it," he wrote when revealing his design on Twitter.

It depicts a cartoon of Trump's face as a large flame, which is huge in comparison to the scale of the White House illustrated at the bottom. The Fire and Fury title is black to match the background, while the tagline is written in white beneath.

As with his designs for Time, created to illustrate Trump's escalating "meltdown" during the presidential campaign, Rodriguez chose the colours of the flame to resemble the president's visage. The orange represents his tanned face and the yellow top mimics his blonde hair. An open mouth with bright white teeth is placed in the centre.

Rodriguez has also portrayed Trump for another Time magazine cover, for which he illustrated him as figure giving a Nazi salute covered by the American flag, and in satirical designs for German magazine Der Spiegel.

The artist joins a host of creative figures who have used their work to critique or mock the Trump administration, including industrial designer Tucker Viemeister who proposed a Nazi-style logo for him.

Fire and Fury: Inside the Trump White House was rushed to an earlier publication at the beginning of this month after enticing excerpts were released. Others are now following Rodriguez's suit and posting alternative designs for the book's cover on social media using the hashtag #betterfireandfurycovers.

Trump-related news that has emerged in the past week alone include an announcement that his proposed US-Mexico border is expected to cost $33 billion, and that his skyscraper on Fifth Avenue caught on fire and injured three people. 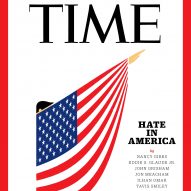 The New Yorker, Economist and Time reflect on rise of race hate in America with illustrated covers