Architecture studio SPF Architects has completed a sports facility in Los Angeles consisting of two separate buildings that were built using pre-engineered metal structures in order to not disrupt activity at the site.

Originally called the Rancho Cienega Sports Complex, the Michelle and Barack Obama Sports Complex was sited in Baldwin Hills, a neighbourhood in Los Angeles renowned for its athletic achievement.

Because of the ongoing athletic activity at the park, it was necessary that SPF Architects find a design program that involved multi-phase construction.

The studio landed on pre-engineered metal buildings (PEMB) from Nucor in order to create structures spacious enough for athletic activity that could be fabricated off-site.

The PEMBs consist of the structure and an exterior, which consists of insulated rib metal panels.

"When you see these pre-engineered metal buildings, seeing them out on these big giant farm buildings," Zoltan told Dezeen. "It's basically a box – there's very little fenestration on it."

"So for both of them what we did was really modified and altered that significantly," he continued.

These modifications entailed having the metal skin of the exterior not come all the way to the ground so glass panels could be placed there instead, some of which can be lifted up like garage doors, opening the interior to the athletic fields beyond.

Another significant modification was the addition of Solatube skylights in the ceiling of the building so that during the day natural light can light the building entirely.

Pali said that the goal was to be able to get the basketball building as close to net-zero as possible.

SPF Architects used the aforementioned skylights, photovoltaic panels and grey water re-collection to approach this goal, the success of which won't be known until the building has been used for some time, according to Pali.

Pali also cited the lightweight steel and efficiency of the PEMBs as sustainable aspects of the design. 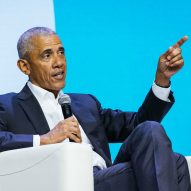 Another aspect of the design built specifically for the arid environment was drought-resistant landscaping designed by Hood Design Studio.

According to SPF Architects, a grid-like pattern was used to incorporate five of the different ecologies of southern California to "physically tie the buildings and sports fields together while giving the community attractive and useable parkland in the voids between facilities".

The complex – well-known for being a place where tennis players Venus and Serena Williams practised as youths – opened in June 2022. The name change came after a local street was named for the former president.

SPF Architects has completed other projects in California including louvre-clad lofts in Hollywood and a three-winged hilltop residence in Bel Air.

The photography is by Mike Kelley