The Consumer Electronics Show has admitted that the technology sector "can and must do better" to encourage diversity, following criticism of the event's all-male keynote speaker line-up.

CES, the world's most important platform for technology product launches, opened this week in Las Vegas. But the event was forced to respond after attendees took to social media and the press to highlight the lack of female speakers.

In a letter dated 5 January 2018, the event's executives said they were "committed to changing the status quo" and promised to increase the number of women speakers next year.

"As we plan 2019, we will redouble our efforts to expand women's voices throughout the conference and as featured speakers," wrote Gary Shapiro, president and CEO of CES organiser the Consumer Technology Association,  and Karen Chupka, senior vice president of corporate business strategy at CES.

The letter was addressed to Gina Glantz, founder of equality group Gender Avenger, who last month wrote a newspaper article criticising CES for perpetuating male dominance in the industry.

"Zero women speaking in the most coveted slots is a big flashing signal that we're not worth it," she wrote.

"When only men appear, we perpetuate a power dynamic that creates opportunities for abuse. When women are expected to be on stage because they are powerful, they will become powerful and a powerful deterrent to a sense of male entitlement."

In its response, the Consumer Technology Association cited a recent report from the US Government Accountability Office, which found that "there remains a persistent lack of racial, ethnic, and gender diversity in the technology workforce".

"We agree, especially for women in leadership roles," said the CTA. "This is a global issue – not just within the technology sector –all industries and our society at large can and must do better. Those of us who produce events must do better too."

CES unveiled its list of six male keynote speakers, five of which are white, last month. In response, Twitter users posted a barrage of messages using the hashtag #CESallwhitemales.

"@CES is year is running a panel without females... how is this real in this day in age?" tweeted marketing manager Olivia Yang.

Men encouraged to boycott the event

Digiday magazine first reported the complaints, which included a call from Antonio Lucio, global chief marketing officer at HP, for men to boycott the event. "All men should boycott CES if women are not invited to speak!" Lucio tweeted. "Insulting in this day and age. We must do better!"

Entrepreneur Cindy Gallop tweeted: "It is unacceptable for @CES to have an all-male lineup of keynote speakers. You have five weeks to do better, CES!" 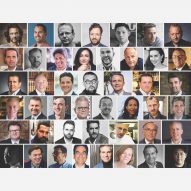 CES senior vice president Karen Chupka later responded to the criticisms, saying there was a "limited pool" of high-ranking women eligible to be keynote speakers. "To keynote at CES, the speaker must head (president/CEO level) a large entity who has name recognition in the industry," she wrote.

"As upsetting as it is, there is a limited pool when it comes to women in these positions. We feel your pain. It bothers us, too. The tech industry and every industry must do better."

Chupka said that CES had featured 15 female keynote speakers over the past seven years and had 275 female speakers, including two all-female panels, at the 2017 event. However, according to the CES website, the event featured a total of 1,200 speakers, meaning women made up just 23 per cent of all speakers.

Problem is widespread across industry

The design and tech sectors are increasingly coming under the spotlight for their lack of diversity. In November a Dezeen survey revealed a "shocking" lack of gender diversity at top architecture firms, while the Restaurant and Bar Awards was forced to commit to increasing the number of female judges after releasing a list composed overwhelmingly of white men.

Similarly, last month World Architecture Festival programme director Paul Finch told Dezeen it was "difficult to get prominent women architects as speakers," after it emerged that just 30 per cent of the 125 award judges were women, and just 27 per cent of conference speakers female.

CES, which takes place in Las Vegas each January, celebrated its 50th anniversary last year. With over 180,000 attendees it is by far the biggest tech conference and fair in the world.

The 2018 edition opened to the public this week. Big launches include a tech-laden concept car by Chinese startup Byton, a wearable UV sensor by L'Oréal, and a minimal security camera designed by Yves Behar.