Best known for the post-war housing he designed for north London, Brown is is the 2018 laureate of the RIBA Royal Gold Medal – an accolade he received in an unusually early ceremony in late 2017, due to his ill health.

RIBA president Ben Derbyshire was among the first to pay tribute to Brown, who passed away on 9 January 2018.

"The architecture community has lost a giant," said Derbyshire. "Neave was a pioneer: he showed us how intellectual rigour, sensitive urbanism, his supreme design skill and determination could deliver well-being to the local community he served so well in Camden."

"His ideas, for low-rise high-density housing with private outside space for all residents, still stand as a radical antidote to much of the unthinking, not to say degrading, housing product of the era. Neave's contribution to architecture will not be forgotten."

Brown was born in 1929 in Utica, New York, before moving to the UK as a teenager.

He studied at the Architectural Association in London, before taking up a post at Camden Council, where he designed his best known project – the Alexandra Road estate. The eight-storey housing scheme boasts a striking stepped formation, with an avenue running through its centre and elevated walkways above.

Other projects include a range of low-rise high-density housing schemes – one of which he and his wife Janet made home, the Dunboyne Road estate. He also designed housing projects in both the Netherlands and Italy.

Brown was revealed as the winner of the RIBA Royal Gold Medal at a time when the standard of social housing in the UK was very much in question, following the tragedy of the Grenfell Tower fire and the then-imminent demolition of Robin Hood Gardens.

In a recent interview with Dezeen, Brown said he was "astonished" to have received the award that many believed he deserved much earlier in his career.

"I am astonished that my work is alive and well in the history of architecture, and that young people look at it and come and visit it, and it is a very active ingredient in the background now," he said.

"To me it had just become to my great sadness, simply a piece in the past. And I was, in that sense, dumbfounded and amazed when I heard that I had been put up for the Royal Gold Medal."

Brown had been due to host a debate on social housing at the RIBA in London with The Guardian's architecture critic, Oliver Wainwright, on 1 February 2018.

RIP Neave Brown. Feisty, fearless and a staunch defender of social housing until the end. "I didn’t think I was designing social housing, but just housing. Good London housing.” https://t.co/fe9yYx1Ja2

Very sad to hear of the death yesterday of the wonderful Neave Brown. Architect of our estate and champion of social housing. Our thoughts are with his family. @RIBA @Grindrod pic.twitter.com/VRwk5Aijl7

What a life. RIP Neave Brown

Very sad to hear the news of the death of Neave Brown but happy that he lived to enjoy the full recognition he deserved and that so many continue to benefit from the beautiful council homes he designed.

Very sad to hear about the death of Neave Brown: a pioneer of social housing, his work included the magnificent @AA_Estate, which was the first Post-War housing estate to be added to the list https://t.co/rPyjcE0RBK pic.twitter.com/azmfeGpier

This is awful news, hearing of the death of Neave Brown, one of the most important social housing architects, and shaper of late 20th century architecture more widely. Key in transforming Camden and creating innovative & high quality housing for thousands of Camden families https://t.co/m03wGc0SrD 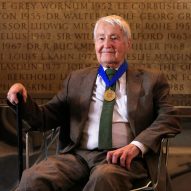 High-rise buildings should only be used to house the very rich, says Neave Brown