Copenhagen-based art and design studio Wang & Söderström has used algorithms to form the patterned surfaces of these vases, which are 3D-printed from plaster and set inside lumpy bases.

Wang & Söderström produced the limited-edition Excavation series with Unique Board, a New York-based company that teams up with artists and designers to create and sell 3D-printed sculptural objects.

The three designs in the collection each comprise two contrasting parts that overlap and slot together. The studio originally created them as art pieces, but decided the shapes made them well-suited for use as vases – the upper volumes holds flowers while the lower parts form the bases.

The top part is made of plaster and the surface is decorated with patterns developed from algorithms. The studio created a 3D model of the design before sending it to a 3D ColorJet printer, which adds the hues during the production process.

To create the more organically shaped bases, Wang & Söderström 3D-printed each of the bulbous volumes. These were used to create moulds for casting the final pieces from polyurethane, finished with glossy paintwork and an imprint of the studio's name on the underside.

"Printing in full colour allowed us to seamlessly transfer the digital data to physical form," Wang & Söderström co-founder Anny Wang told Dezeen. "The bottom piece is casted in polyurethane in order to give the the sculpture a solid and heavier foundation."

Among the trio in Excavation is a narrow, flecked pink-hued vase, which is paired with a burnt-red/orange base, and a squat, dark green vase that is covered in yellow speckles and set on a pale green stand. A black bottom forms the contrasting support for a triangular-shaped vessel. Its grey surface is patterned with mix of cream, pink and yellow.

Others that have experimented with 3D printing to create vases include Dutch designer Olivier van Herpt, who created a clay sextet influenced by a fashion collection by COS, and

Wang & Söderström intends its vases to present an example of 3D-printed design with plenty of character, and encourages users to fill the vessels with twigs, dry flowers and reeds that offer a "direct contrast to the virtual world".

"The three sculptures are the result of an experimental approach on how to bring virtual objects to life," said Wang. "Created with the precision of digital software and 3D printing, which is hidden in a layer of an organic idiom."

"We wanted to use digital processes but keep a human imprint, to capture this significant time of ours, where the digital weaves more and more into our lives," she added. 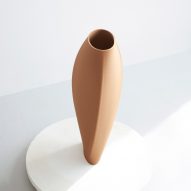 Photography is by Mishael Phillip.