This house near Helsinki perches on a rocky bluff looking out towards the Baltic Sea and features a cranked form that shelters a decked terrace from the harsh wind.

Local studios Mer Architects and Ettala Palomeras Architects collaborated on the design of Villa K, which is located in the Spjutsund area along the coast from the Finnish capital.

The clients are a couple in their forties who wanted to build a new home to enjoy as a couple after their children had moved away.

They settled on a site occupied by a cabin with its own small stretch of shoreline, steep bedrock cliffs, a stream, some wetland and a mossy forest.

The new building is nestled between a large rock and the cliff at the highest point of the site, and occupies the same footprint as the small cabin.

Mer Architects has completed several properties in rural Finland, including a house with a large glazed gable looking out across a meadow, and a spruce-clad villa positioned on a rocky outcrop facing the sea.

Before commissioning the architects, the owners of Villa K built a sauna on the site and spent time there understanding how the natural surroundings should inform the design of the house.

"The clients asked for a house with natural, rough materials, and wished that the building be built of pre-cast concrete elements," the architects explained.

"The evening sun and sea view to the west and north-west were the starting point of the layout."

The building rises up from a set of wide stairs at the front to an elevated rear facade that is flanked by tall trees and looks out through a gap in the forest.

The majority of the building is perched on the edge of the bedrock. A basement level visible from the northern side contains the compact sauna, as well as a small gym, storage area and technical rooms.

The cranked plan extends around the freestanding rock on the east side of the house and creates space for a terrace that is sheltered from the cold sea winds.

The steps at the front of building also lead towards a sheltered deck outside the entrance to the main living spaces, which occupy the whole of the ground floor.

A corridor extends from the entrance past a bathroom and the stairs to the basement into an open-plan space containing a lounge, kitchen and dining area.

A sliding glass door situated next to a suspended fireplace connects the living space with the sheltered terrace facing the forest.

The master bedroom is accommodated on a mezzanine at the highest point of the house, which is reached by a staircase featuring chunky oak steps.

Both a small study at the rear of the ground floor and the mezzanine bedroom feature sliding doors that open onto terraces providing views towards the sea.

Materials used throughout the project are chosen to complement the natural setting and create the sense of a robust shell protecting a warm and comfortable interior.

"The carpenter-made stairs and cabinets, together with the birch-veneer ceiling, add warmth to the ascetic and rough concrete surfaces," said the architects. "The economical scale of the spaces also contributes to the cosy character of the house."

Photography is by Tiia Ettala. 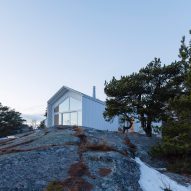