Ortraum Architects has built an asymmetric studio called 12 in the garden of a house in Helsinki, Finland, to provide its owners with space to compose music and make ceramics.

The structure was commissioned by a couple who wanted an external space to work from home, beside their existing 1960s home in the Jollas neighbourhood.

It features two contrasting storeys that Ortraum Architects has set askew, giving rise to a sculptural form and two individual workspaces inside for the couple.

The 12 studio, which has been shortlisted in the Dezeen Awards in the small workspace interior category, measures 72-square-metres and is complete with a kitchen and bathroom.

While providing individual studio space for the couple, it is designed to be easily adapted into a guest house or even become a home for the client's children in the future.

"The client couple needed two main spaces, a ceramics workshop and a music-composing studio," said the studio. "The massing is visually divided into two levels, reflecting the two different building functions," it continued.

"The plan also needed to be flexible enough to function additionally as a guest house and future home for one of the two children in the family, so bathroom and kitchen spaces were included."

The material palette of 12 is deliberately pared-back, with its cross-laminated-timber (CLT) structure left exposed internally and externally. On the exterior, this will turn grey with time to help the structure blend in with its surroundings.

Its entrance is marked by large glass doors that face the existing home, sheltered by a small cantilevered corner of the second floor.

This entrance opens into the ceramics studio on the ground floor, which is complete with a small bathroom.

A black wooden staircase that leads to the first floor is concealed behind a wall and features treads that double as storage units.

Above, the first floor contains the music studio. Its angular form was developed to help enhance the acoustics of the space and make it suitable for recording music.

This space is complete with two large windows that open towards a neighbouring forest, alongside a small balcony and gallery level for use as an extra lounge area.

Ortraum Studio's goal for 12 was for it to "be a best practice example for environmentally friendly construction and infill projects in a suburban context". 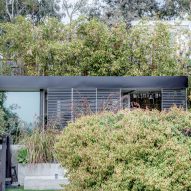 For this reason, its size was dictated by an existing concrete foundation from an old garage, avoiding the need for new and obtrusive groundwork, while its structure was prefabricated using CLT to avoid waste and speed up construction time.

It has also been developed to facilitate natural ventilation and is powered by solar panels and heated using a ground source heat pump of the main home.

As part of the project, Ortraum Architects also built a small playhouse for the client's children, which is also made of CLT and is tied to a pine tree in the garden.

Named the Birdhouse, it features heart-shaped windows and is modelled on pictures that the children drew of their "dream house".

Ortraum architects is a small Finnish design studio headed up by architect Martin Lukasczyk. In 2017, it completed a family home in Finland that has a number of child-friendly features including a trapeze, a climbing wall and a hammock.