Spanish design practice Aguskim Studio has created a collection of lamps inspired by the full moon for lighting brand Almerich.

Meanwhile, the suspension lamps are made up of a network of three to five glass globes of various different sizes.

"Its minimalist design and the combination of its geometric forms make it have a strong character and a balanced disorder," explained the designers, Maria Kim and Agustin García, who originally created the Moon series in 2015.

After presenting the collection to Almerich the following year, the designs were put into production in 2017 and showcased the same year at Feria Habitat Valencia in September 2017.

"The collection is born from the table lamp, which is composed of two light points and a support base that identifies it and differentiate it from other lamps," the designers told Dezeen.

Both graduates of the UCH-CEU design academy in Valencia, Spain, Maria Kim and Agustin García worked in various architecture and design firms before coming together to set up Aguskim Studio in 2014.

The duo state that they strive to create unique products and graphics that "achieve harmony with the end user".

Aguskim Studio is not the first to look to the skies for inspiration when designing lighting. Just last month, German designer Stefan Diez launched a collection of celestial lights with invisible light sources for lighting brand Vibia, while Tel Aviv designer Nir Meiri's lamp features two circular diffusers that each look like a glowing full moon. 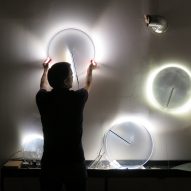