Swedish design studio Front has created a collection of colourful rugs, then transformed the design to produce matching poufs.

Front aimed to replicate the tessellating patterns of parquet flooring with the range, which is being launched by rug brand Gan at IMM Cologne this week.

Called Parquet, the collection includes three modular designs: Tetragon, Rhomb and Hexagon. Each of these designs can also be applied to geometric poufs, because the designers have transformed the 2D patterns into nets for 3D shapes.

According to Front, which is led by designers Anna Lindgren and Sofia Lagerkvist, the shapes in each pattern "fit together as a jigsaw puzzle".

"We were inspired by old floors in palaces and churches that often were decorated," they said. "We wanted to create a colourful rug with geometrical patterns."

Tetragon features a variety of different shapes and colours, which fit together in a pattern of octagons and squares. It folds up into a six-sided pouf, with eight-sided surfaces and flattened triangular corners.

Rhomb is a pattern of squares and diamonds, in shades of grey and orange. When folded up, it takes the same shape as the Tetragon pouf.

The Hexagon pattern is more simplistic, made up of striped diamonds that fit together into a honeycomb formation. Its matching pouf has 20 sides.

All of the products are manufactured from wool using an old flat-weaving technique called kilim, which is typical in the Middle East.

"The old craft of parquet flooring were translated by the skilled weavers in the traditional kilim technique," added Front.

Gan is showcasing the Parquet collection in Hall 22 at IMM Cologne, which takes place from 15 to 21 January 2018.

Other highlights from the fair this year include confectionery-inspired glass tables and mirrors inspired by those used by Parisian barbers. 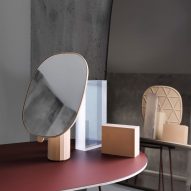 Muuto launches mirror to match those used by Parisian barbers