Italian architecture office 2A+P/A has brought an Ettore Sottsass painting to life to create a black barrel-roofed pavilion for an architecture festival in Orléans, France.

The Rome-based architects took the axonometric watercolour painting of an arched building with irregular windows made by Sottsass and used it as a basis for their structure.

Sottsass, the renowned Italian architect and designer who founded the Memphis group, made hundreds of sketches throughout his life. Some were later made into objects or buildings and some exist purely as art works.

"In the very mysterious yet highly expressive appearance of Architettura Monumentale we recognised a tacit potential waiting to be developed," said 2A+P/A founders Gianfranco Bombaci and Matteo Costanzo.

"The chance to open a dialogue with Ettore Sottsass and start a collaboration beyond the limits of time and life."

The architects backwards engineered a design for the building, imagining what the other two sides of the structure not shown in the sketch could look like, and how an interior glimpsed only briefly through the windows of Sottsass' picture should be laid out.

"The key was to introduce an abstract yellow structure of columns and beams in the black shell," explained the architects.

"The new element has a rigid geometry and yet reacts to the curve of the ceiling constructing a free but interdependent relationship with the vault."

The yellow grid alludes to several stories and rooms but remains abstract from the outer shell, referencing how Sottsass' drawing shows little correlation between the windows and where floors could logically sit. Earlier models for the work allowed for a series of galleries to run around the exterior wall, connected by staircases.

For the first Biennale d'Architecture d'Orléans, 2A+P/A built a reduced version of its design as a pavilion to host an art exhibition curated by the architects.

The structure is formed from prefabricated wooden panels that were durable yet quick and easy to assemble on location, in a town square.

Called the Cabinet of Curiosities, the interior walls have been covered in 36 drawings like a "fresco" that forms "a visual essay that exposes our idea of architecture in its intimate form".

The biennale runs until 18 March 2018, after which the pavilion will be moving to a permanent location in the Parc Floral close to Orléans, where it will continue to host exhibitions and function as a venue for future biennales.

After the 32nd Bienal de São Paulo five local architects created pavilions that double as galleries to sit in the ground of the Alvaro Siza-designed Serralves Foundation in Porto, Brazil. 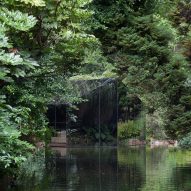