Launching at IMM Cologne this week, Mimic Mirror is designed by Normal Studio's Jean-François Dingjian and Eloi Chafaï as a contemporary take on the traditional table mirror.

The Paris-based duo based the design on the mirrors they had often observed in barber shops, which typically featured a sculpted pattern on their back.

A soft coated plastic surrounds the mirror's face, contrasting with the solidity of the sculpted cement stand. The designers suggest this gives the mirror a sculptural but friendly appearance.

The product takes its name from the various repetitive elements in the design – from facets around the base of the stand, to a pattern of triangles on the back – but also references the mirror's function.

"Mimic Mirror grew from the idea of having a table mirror with a sculptural expression, making for a design that is both an object of decoration and use," said Dingjian and Chafaï.

"We wanted for the design to exist in harmony with the space in which it is present while adding to the atmosphere of the room through its characteristic
expression. Bringing a new perspective to the traditional table mirror, Mimic has a playful appearance while serving its intended function with a friendly ease."

Mimic Mirror is the first product that Normal Studio has designed for Muuto. It is available in three colours: midnight blue, nude and grey.

Muuto is presenting the mirror at the IMM Cologne furniture fair all this week, along with a range of other recently launched products.

These include the Loft Bar Stools by Danish designer Thomas Bentzen, the Fiber armchairs by Copenhagen studio Iskos-Berlin and the Outline Sofa Chaise Longues by Oslo-based Anderssen & Voll.

With a minimal aesthetic and muted, pastel tones, each of the five products in the collection are intended to complement one another.

IMM Cologne takes place from 15 to 21 January 2018. Other highlights at the fair include Sebastian Herkner's confectionery-inspired glass tables for Pulpo, and Max Enrich's trio of nesting steel coffee tables. 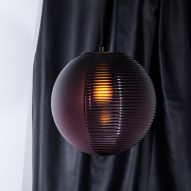