Neave Brown's extraordinary legacy reflects a progressive social agenda that is lacking in many of today's architects, says Catherine Slessor.

The architectural highlight of 2017, without doubt, was Neave Brown's valedictory lecture in the unlikely confines of London's Hackney Empire. As he came on stage, to rapturous applause, he gave a little shimmy to the crowd, as if he couldn't quite believe this was all for him. At the end of an impassioned discourse, he received a standing ovation. Most of the audience knew it would be his last public appearance, as he was enduring the final stages of the cancer that killed him on 9 January, aged 88.

Having done the decent thing of awarding him the 2018 Royal Gold Medal, the RIBA did another decent thing by bringing its gonging ceremony forward, as one of the award's technical stipulations is that there must be a living recipient to receive it. Duly garlanded and chiselled into the marble portals of Portland Place, Neave Brown is now among architecture's immortals.

Some despicable professional contrarians have suggested that the prospect of imminent demise helped swing the Gold Medal his way. But in truth, he required no sympathy vote, as his extraordinary life and work speak for themselves. And with a powerful and enduring eloquence, as all his British buildings have been listed as modernist exemplars.

Brown's trajectory was unorthodox and rich with incident

Brown's trajectory was unorthodox and rich with incident. Eschewing the usual arc of disappointment that characterises most architectural careers – the early promise, the flowering, the plateauing, and finally, the irrelevance – Brown baled out after the flowering. Having built a handful of pioneering housing projects in Camden, he then gave up architectural practice in the UK, following a lengthy public enquiry into the alleged shortcomings of Alexandra Road (pictured). He was exonerated, but knew that mud would stick. 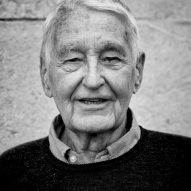 Yet though his oeuvre is small, it is intensely and beautifully considered. Most admirably, it reflects a consistent commitment to the idea of making decent social housing, thrown into hideously stark relief by last summer's Grenfell Tower fire. With the comprehensive dismantling of affordable housing provision, initially through the Thatcherite right-to-buy policy of the late 1970s, the notion of housing as a social good for which the state is responsible has long been abandoned. Housing is now seen as a commodity, and cities, especially London, are being eviscerated and stratified by wealth, class and race.

"We cannot do social housing or housing for low-income people, urban housing, we cannot do it as private enterprise. It simply can't be done," Brown told Dezeen in an interview in October 2017.

"We have to find a way of restarting housing programmes," he added. "We have to totally redefine standards, finances, occupation, land use, acquisition and so forth."

Brown's quest to devise new low-density housing models began when he left the AA. In 1963, he limbered up with a reconceptualisation of a traditional terrace in Winscombe Street in Dartmouth Park; five houses joined together, each with a tight, corkscrew stair linking their three storeys. In a gently radical move, children's bedrooms were placed on the ground floor, adults at the top, sandwiching a living space resembling the promenade deck of an ocean liner in between. A further external spiral stair swerved down from the deck into shared gardens to cultivate communality.

Forms were laconic and repetitive, materiality tough and sections complex, connoting architecture as an armature for inhabitation and sociability. It presaged the shape of things to come, creating frameworks in an anonymous way around semi-private or public space, like Georgian and Victorian templates for speculative housing.

"Instead of violating the environment with towers and slab blocks surrounded by undefined space, we wanted to do housing that acknowledged our traditions and made a piece of city," said Brown in an interview with The Guardian. "People's houses, front doors and gardens are part of the structure of the environment for everybody. It means you can mix classes and incomes, old and young all together in a continuous environment, where everybody gains by contact with everybody." 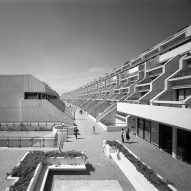 Drawn into the orbit of Camden borough architect Sidney Cook, Brown completed two further housing schemes at Fleet Road in 1977 and Alexandra Road a year later. The former is a modern hanging gardens, the latter a muscular curve of stepped concrete bulwarking a railway line in Swiss Cottage. Displaying an astonishing formal and social bravura, its intricate, ziggurat profile comprehensively redefined the concept of the London terrace. But squabbles over costs and delays soured its completion, impelling Brown to seek a more receptive milieu in the Netherlands. Here, he designed large-scale, mixed-use schemes that strove to reframe the texture and experience of the city, echoing the precepts of his early London projects.

Brown stood with dignity outside this hubris, quietly restating by thought and deed what it really meant to be an architect

At 73, he quit architecture altogether to study fine art, seemingly content to merge into late career anonymity. But over time, the quality and invention of his buildings prevailed, feted by new generations of scholars, students and supporters. His Camden trio became required viewing, especially the futuristic fantasia of Alexandra Road, regularly co-opted into film and video shoots. Latterly, digital dissemination kept the flame burning and invariably, he piqued the interest of the new brutalist obsessives, though his take on it was much less hardcore than some might suppose.

Last year's publication of the insightful Cook's Camden by Mark Swenarton provided a formal record of his accomplishments and an informal record of how far architects have fallen in the modern era. From helping to drive and implement a progressive social agenda, as its forebears once did, the profession is now hopelessly marginalised, happy to provide the glitter on any old dungheap. Alert and articulate to the end, Brown stood with dignity outside this hubris, quietly restating by thought and deed what it really meant to be an architect.